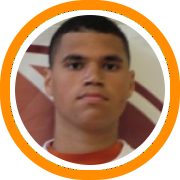 Theodore Boyomo (2010)- While the wide bodied post player was an absolute beast on the boards, he also showed off his repertoire of moves around the basket. We saw him connect on a couple of beautiful jump hooks after creating space in the paint.

Ricardo Ledo (2012):  The future St. Andrew’s product had quite the showing on Sunday. We saw him numerous times use his wide crossover, both right to left and left to right, to get to the bucket and finish with contact.  Lido not only got into the lane off of his dribble drive moves but we also saw great consistency in his three point stroke throughout the day as he was knocking it down. He showed excellent leaping ability as he connected with teammate Shabazz Napier on a nice ally-oop.

Aziz Dieng (2010): Dieng has clearly put in countless hours of hard work in the gym as he portrayed a much improved handle and court sense, playing both the point and wing for his team. When running the   point, he created shots for others and from his more natural position on the wing, he consistently knocked down shots from the perimeter. He sparked his team with his high energy and motor. The New Hampshire native scored in a variety of ways, using his face up game when on the wing to shoot over an opposing defender or even make a nice rip through move for a finish. The Pomfret product went for double figures (6/7 from the field) before he went down with an ankle injury that ended him for the day.

Shabazz Napier (2011)- Napier shot the ball well per usual but what stood out was his aggressive mentality on both offense and defense. He didn’t waste any time off defensive rebounds as he went straight to the rim and showed off his athleticism as he hung in the air and switched hands on a finish after going coast to coast.

Denzel Brito (2010)- On day two of action, Brito showed off his ability to play the lead guard, really passing the ball well and getting others involved. The Lawrence Academy prospect showed unbelievable explosiveness getting to the rim. One of the best guards in the gym, no doubt.

Derek Retos (2010): He knocked down an array of shots per his normal unlimited shooting range, but it was the intangibles that separated him from the rest today. He played extremely well defensively against more athletic/bigger guards, getting consecutive steals of inbounds passes for 3’s and showing anticipation getting into the passing lanes.

Tevin Falzon (2011)- It appears that Newton North has a young and talented up and coming front court between Falzon and Macam Bak Macam. What Falzon showed off today was a soft touch around the basket that allowed him to score in a variety of ways with jump hooks, power finishes and face up shots. He also showed that he couldn’t be slept on from beyond the arc as he displayed a nice stroke from long range. The big fella rebounded well, doing a good job of using his body and getting position around the rim.

Koang Thok(2010)- Long, athletic guard who was very active all day. Koang got his hands on a lot of loose balls and showed great footwork when slashing, allowing him to slice through the defense and get to the rim. We also witnessed a beautiful right to left cross for a step back jumper.

Ike Azotam (2010)- Long, well built player with sneaky athleticism who is said to be heading to prep school next year.  Azotam constantly finished above the rim with dunks, but in addition, showed a nice face-up game on the baseline.

Akeem Williams (2010)- After one year at Winchendon it is obvious that he has not only  gained more muscle mass, but has also changed his basketball mindset, playing more like a pass first point guard. Williams played with a high motor as usual, getting to the cup, but seemed to be looking to make plays for his teammates today rather than his own shot.

Chris Sherwood (2012)- Explosive wing who is reclassifying as a sophomore at Brimmer and May next season. Sherwood made his living slashing to the basket, finishing with dunks, and playing above the rim. Where he really separated himself today was by knocking down shots around, and inside of, the perimeter.

Darryl Best Jr.- Best is a physical 5-man with a good basketball body and soft hands.  He showed a collection of moves, including a nice face up rip-through to the right hand for a jump hook.

Hakeem Harris- Harris is a very aggressive guard who pushed the ball throughout the day and attacked the basket. He also showed some nice range from the outside.

Tyler Olander- The Connecticut native really filled it up today as he was very assertive on both ends of the floor. The big man scored in a variety of ways , scoring on multiple put backs, showing a beautiful touch 12 feet in, and mixing it up with a nice up an under move.

Dennis Clifford- Showed improved strength as he kept the ball high while being smothered by defenders; Andrew Chrabascz- aggressive post/wing scorer who is a 2012 prospect and has the potential to be very good; Ousmane Drame- Big with length who runs the floor and has loads of potential;  Tyler Strange- ran his team extremely well with a tight handle and high basketball IQ; John Henault- very solid shooter and scorer from the wing; Jake Fay- played well for the 2nd straight day, making shots;  Jared Fay- there are two shooters in the Fay family as Jared consistently knocked it down from the perimeter all day; Mario Monroe- force inside with the potential to be a beast; Chris Fitzgerald- showed a soft jump hook, finished well and battled against some very good bigs; Joe Bozzuto- tight handle, got to the basket and made tough 3’s off the bounce; Steve Wynn- athletic 2012 prospect who shot the ball well and showed a quick, controlled handle; Ryan Romich- long and strong wing who played great in the open floor;  Khem Birch- active long wing who challenged shots at the rim and played within self; Hector Harold- his length and athleticism allowed him to finish with authority;  Anthony Ireland- showed great passing ability, especially in the open floor; Patrick Ackerman- Big body with soft touch 12 ft in; Anthony Barry- athletic, crafty wing who excelled in transition; Jeff Tagger- heady point guard who played very unselfish and controlled the pace for his team; Demitry Coronell- lethal in transition and attacking the hoop