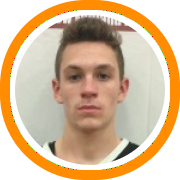 The Manchester, New Hampshire native recently finished his second season with the Rams after beginning his career at Manchester Central High School and was part of the BABC team that won their Division A of the Nike EYBL regular season last year.

An aggressive southpaw, Hanson has now proven his ability to make plays on both ends of the floor at the highest levels of prep and grassroots competition. He can score the ball in bunches, both by making knife like slashes to the rim and tough jumpers from the perimeter, and was also a playmaker in the second line of BABC's full court pressure defense.

At Florida Southern, he'll star for former Southern Connecticut head coach Mike Donnelly, who recently completed his first season at the helm of the program. FSC is a part of the Sunshine State Conference and won the 2015 NCAA Division II National Championship.