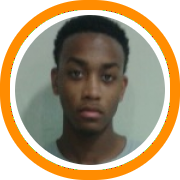 Divided between two sites – Western New England University and Springfield College – the competition among teams vying for a quarterfinals slot was fierce. Individual battles were also in abundance as players sought to distinguish themselves and grab the attention of college recruiters.

While a couple notable, albeit minor, injuries limited Paschal Chukwu (hand and ankle) and Mustapha Heron (leg), there were still a number of players who produced highlight-worthy performances.

Chris Boucher – QC United – Boucher was everywhere on Saturday. The long and extremely slender 6-foot-10 Canadian was consistently QC’s best offensive and defensive player. He not only knocked down open 15-18 footers, a deep three pointer and a number of baskets from inside the paint, but he was a defensive menace. More than once he closed out a perimeter shooter by deflecting the attempt and giving his team a scoring opportunity in transition. While a lack of weight remains a concern, Boucher’s talent and undeniable athleticism will make him a good get for the right level Division 1 program.

Cullen Burke – Mass Hoops Jaguars – The rising 6-foot senior from Cathedral (MA) was the Jaguars’ best player in Saturday morning game action. The lefty was consistently under control and showed a nice offensive touch. With a herky-jerky style, Burke was able to free up his left-hand for a series of midrange jumpers and floaters.

Jordan Butler – Connecticut Select – The rugged 6-foot-7 power forward will be a force inside during his upcoming post-grad year at Putnam Science Academy. His athleticism and sheer strength – almost football-esque – will create countless mismatches for opponents. On Saturday, he used both attributes to score inside and also clean up the glass.

Aaron Calixte – New England Playaz – Calixte continues to be the tempo-setter for his team. With a ‘get-it-and-go’ mentality, the 5-foot-11 point guard excels in the open court. When forced into half-court sets on Saturday, he still managed to blow by defenders and get into the lane with ease. And when defenders dropped off him to guard against the penetration, Calixte drained a few deep field goals as well as a handful of pull-up jumpers.

Schadrac Casimir – USAD – Despite being undersized (5-foot-10), Casimir does not let his diminutive stature limit his on-court contributions. On Saturday, he fearlessly crashed the boards, even earning himself a put back off an offensive rebound. Coupled with an explosive first step and an ability to knock down deep and contested shots, Casimir remains one of the more exciting players to watch in the field; turn your head away and you just might miss something.

Kevin Durkin – Blackstone Valley Chaos – At 6-foot-8, the rising senior remains a work in progress. Still, his role as a solid screener and someone who willingly does the dirty work cannot be overlooked. Durkin crashes the boards recklessly and picked up a couple buckets on Saturday solely on effort. While he might not fill up the box score, players like Durkin, given his size and motor, cannot be overlooked for programs seeking a workmanlike inside presence.

Tyler English – Buffalo Titans – With deceptive athleticism and a surprisingly wide wingspan for someone with a 6-foot-3 build – combined with a high-level of fundamentals and a keen basketball IQ – English has the makings of a dangerous scorer. Timely cuts, finishing with both hands and instinctively using the rim to protect his shot against looming defenders were only a few ways in which he piled up points. While the form and rhythm of his outside shot is still evolving, English proved that he’s a threat each time he slashes to the bucket.

Bobby Frasco – Fundamental University (IL) – As one of the purest shooters in the gym, Frasco drew the attention of defenses because of his quick release and unlimited range. A consistent threat from downtown, he converted a number of three-pointers on Saturday. Undoubtedly, opponents will be keying on the 6-foot-5 sniper as they look to slow a Fundamental U squad that is already went 2-0 in bracket play.

Ian Gardner – Connecticut Select – Almost every week Gardiner produces a play either offensively or defensively that elicits a reaction from the crowd. On Saturday, it was a simple shot fake from just inside the three-point line followed by two right-handed dribbles and a one-handed tomahawk dunk attempt. And though the 6-foot-4 guard missed, he still drew a foul. The play highlighted his combination of athleticism, aggression and basketball IQ which collectively makes him an intriguing prospect.

Mustapha Heron – New England Playaz – Prior to a leg injury which necessitated him being helped off the court by teammates in the night cap, Heron was his usual efficient self. He hit midrange jumpers from all over the court, including a number along the baseline, and also used his athleticism to blow by defenders and finish at the rim. The physicality and skill of the 6-foot-5 swingman from Class of 2016 continues to make him one of the more highly-touted prospects. It will be fun to see what new wrinkles he adds to his game over the coming months.

Curtis Hyman – CT Roughriders – It’s little wonder that Hyman lists the University of New Hampshire, Quinnipiac and Stonehill, among others, as schools interested in the 6-foot-5 New Britain (CT) High product. Hyman’s nose for the ball and consistent effort on the defensive end produced countless rebounds. Offensively, he moved with purpose oftentimes knowing when to make a strong interior show/cut and provide teammates with nice passing angles. Hyman proved adept at finishing inside by relying on his quickness and jumping abilities. And though he knocked down a couple perimeter shots, the mechanics of his stroke will need continued refinement to gain greater fluidity and consistency.

Josh Jackson – Dorian’s Pride – The Detroit native and Class of 2016 product is fast distinguishing himself as one of the best in his year. At a long and athletic 6-foot-6, Johnson had little trouble blowing by anyone who tried to defend him. He then used his impressive jumping abilities to either finish above the rim or draw fouls. From the free throw line, he further displayed a soft touch and sound shooting stroke.

Jaylen Johnson – Dorian’s Pride – Another high flyer from Michigan, this 6-foot-10 big man was a consistent threat around the bucket for rim-rocking finishes. His quickness and jumping abilities made him a challenging matchup for other players of his stature. Johnson also showcased some nice interior passing with a few shuffle passes to wide open teammates for layups.

Tyler Lydon – New England Playaz – The 6-foot-9 New Hampton School-bound big man showed just why he’s already accrued offers from 11 schools, including Boston College, Iowa, Iowa State, Providence and Virginia Tech, among others. Already a polished scorer, Lydon will need to add size to his thin frame as he prepares for the rigors of NEPSAC Class AAA competition. With increased bulk and a strong feel for the game in place, the Pine Plains, New York product has the potential to become a household name in New England basketball over the next two seasons.

Obi Obiora – Middlesex Magic – The 6-foot-8 Brookline High (MA) product remains a tremendous and intriguing talent given his long arms and ability to post up and finish around the basket. His comfort down low is undeniable. As his range continues to increase beyond the lane so too will the matchup problems he poses for opponents.

Conor O’Brien – Bay State Magic – A rising senior at Thayer Academy, this 6-foot-5 forward knows how to bang. A solid screener, O’Brien not only showcased pick-and-roll and pick-and-pop capabilities, but he also knocked down a couple deep three-pointers proving that he can also the floor to provide his guards more room to operate in the lane.

Taji Owens – Drive4Stardum – A solid rebounder who ran the floor well, Owens often appeared to play bigger than his 6-foot-6 frame would indicate. When challenging taller big men, he adeptly found creative ways to score the ball around the hoop. Owens also ran the floor well, something which was particularly apparent when he finished off a couple fast breaks by sprinting up the court and aggressively filling an open lane.

Colin Richey – Blackstone Valley Chaos – Despite being a high-volume shooter, Richey still consistently attempts high-quality shots and rarely seems to force things. Much like at Choate Rosemary Hall, the 6-foot-1 guard creates his own offense within the confines of the Chaos system. Whether off the dribble or by using teammates screens, Richey knows how to free himself up. And when he finds himself being overplayed or shutdown by opposing defenses, he uses his excellent court sense to find teammates for easy buckets.

Kamari Robinson – West Side Terriers – The athletic 6-foot-5 forward from nearby Central High (Springfield, MA) not only successfully guarded someone five inches taller (6-foot-10 Michael Richard from Monmorency), but he also showcased a handle befitting a guard. On a couple occasions he grabbed a defensive rebound and pushed the ball up court. Robinson knows how to use his strong and burly frame, whether making it difficult on defense for a taller opponent to establish post position or carving out space offensively to score in the paint.

Valentine Sangoyomi – Hunting Park Warriors – Sangoyomi falls under the old adage that ‘you can’t teach size.’ At 6-foot-10, the big man is a load in the middle. He not only takes up space, however. With good hands and a soft touch, he proved on countless occasions that he was a viable offensive option. Still, his post-game will need refinement as he prepares for his senior campaign at Erie First Christian Academy (PA).

James Wagner Jr. – Team Price – At 6-foot-5, Wagner has great length for his size. Not only did he convert a number of three-pointers, but he also used his length to finish from all angles when driving to the basket. Scoop shots, finger rolls and half-hook runners were only a few of the creative ways he amassed points. With the strength to finish after contact, this lefty oftentimes made his scoring look effortless.

Walter Wright – Connecticut Select – The undersized 5-foot-10 guard again proved on Saturday that he can score with the best. On one sequence, he knocked down a deep three-pointer before using his range to set up a nice dribble drive that he finished with an athletic layup. His ability to score in bunches – while also setting up teammates for uncontested jumpers and layups – makes him one of the more exciting sub 6-footers in New England.

Justin Zukowski – MBNation – With Dustin Cole sidelined for the second weekend due to illness, much of the backcourt responsibilities have fallen to Zukowski and Shyheim Ulrickson. But it was the 6-foot-1 Portland (ME) High product who grabbed the attention on Saturday with a game-winning layup as time expired for a two-point win over the New Jersey Celtics. Though MBNation will be playing in the consolation bracket on Sunday, their grit and determination make them one of the more enjoyable teams to follow on the AAU circuit. Zukowski embodied all these qualities against the Celtics.