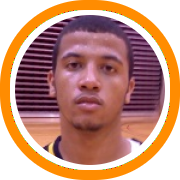 Of the 10 teams in the u15 bracket, 8 were from New England.  The Connecticut Basketball Club was certainly the most dominant of those groups on Saturday afternoon, although both visiting teams (Albany City Rocks and Long Island Lightning) are also particularly strong.

CBC began the day with a hard fought victory over the Springfield Heat and then ran over Drive4Stardum later in the afternoon.  Andre Drummond, Anthony Jernigan, and Tavon Allen (pictured) led the team throughout the day.

Although no official stats were available, we can all but guarantee that Drummond picked up triple-doubles in both games with points, rebounds, and blocked shots.  His ability to dominate a game at the defensive end of the floor is uncanny for a player his age as he blocks shots with both hands, has great timing, and rarely leaves his feet on shot fakes.  Offensively, he has come a long way.  He scores the majority of his points on the offensive glass or in transition, but he is playing much more aggressively then he did a year ago and finally showing a willingness to finish through contact.

As for Jernigan, his prowess with the ball in his hands continues to impress.  It was almost comical to watch the young point guard toy with Springfield’s defenders as they foolishly attempted to reach in for steals.  Jernigan’s ability to finish and pass with his left hand was also impressive as he was equally effective with both hands in the lane.  Like Drummond, Jernigan also has the ability to make plays on the defensive end of the floor.  While he certainly isn’t a shot blocker, his quick hands, high I.Q., and great anticipation skills allowed him to rack up a ton of steals this afternoon.

Then there was Tavon Allen.  Every time we see the Hillhouse swingman we like him more and more.  We noticed at the Rumble in the Bronx that he was practically ambidextrous, but we were still stunned to watch him knock down mid-range pull-ups with both hands on consecutive plays.  He is really beginning to blossom on the offensive end as he is now a very consistent threat from behind the three-point line, proficient at getting into the lane off the dribble, and capable of finishing himself or finding his teammates for easy scores.  What may be most impressive is his feel for the game as he picks his spots beautifully, is very unselfish, and rarely takes a bad shot.

As good as CBC was, they got all they could handle from the Springfield Heat.  Jared Johnson was their most impressive player.  The guard already owns a physically powerful body and a high basketball I.Q.  He made open shots, passed the ball well, and used jab and head fakes better than any other player in the field.  Xavier White, a 5’10” rising sophomore from Chicopee Comp. H.S., also played well as he shot it well from behind the three-point line and was also able to make plays in the open floor with his tight handle.

The Connecticut Hoopstars split there first two games, falling to a very tough City Rocks team in the second contest.  John Papale was persevering through a leg injury and so he didn’t shoot the ball as well as he normally does, but he still managed to act as a bit of a playmaker down the stretch getting to the free-throw line and passing the ball well in transition.  Gerald McClease led a late run as the Hoopstars attempted to erase a deficit in the final minutes of the second half.  McClease is a slasher who is good with the ball and is very proficient at finishing against contact.

Team MPI defeated Drive4Stardum earlier in the day.  MPI was led by Anthony Davis a 5’10” rising sophomore point guard from Trinity Catholic H.S. in Stamford, Connecticut.  “A.D.” pressured people on the defensive end, got to the rim, and knocked down the mid-range jumper.  The young point guard has a bit of a lanky build and should have a nice physique after he fills out his frame.  Rising junior John Roe was also a pest on the defensive end as he fueled MPI’s break with his ability to get steals and deflections.

Drive4Stardum was led by the interior combination of Josiah Simmons (Cromwell HS, CT) and Ethan O’Day (E.O. Smith HS, CT).  Simmons is an undersized forward with a strong body who does his best work in the paint.  O’Day also scored the majority of points down low as he was active inside while showing some nice skills.

The Vermont Cats fell in their first two games of the tournament, although that didn’t stop some of their players from shining.  Josh Varney is a 6’5” big man who has excellent hands and a good ability to finish inside.  Jake Donnelly is a point guard with good size and a very fundamentally sound game.  He can do damage off the dribble or with his outside jumper.  Austin Robinson, a 6’1” swingman, was crafty getting to the hoop and kept defenders honest by knocking down the occasional jumper.

The Connecticut Skills Academy had a strong first showing in their first game although they ran into a very good Long Island Lightning team.  Hillhouse (New Haven, CT) rising sophomore Louis Ellison was very effective in the open floor.  He has great speed with the ball, gets to the rim consistently, and finishes at a high percentage.  He has a tendency to be a little flashy, but once he learns to pick his spots better he will be very dangerous.  Kevin Hoff showed his expanded skill set from the perimeter as he used a jab step to free himself up for a 15 foot jumper, passed well outside the arc, and finished the break with both hands.  Walter Davis Jr., an undersized rising sophomore point guard from Xavier High School (Middletown, CT), knocked down open threes and scored with a tear drop floater inside the lane.  Darryl Best Jr. didn’t get the touches to put up big numbers on the offensive end, although he changed the game on the defensive end.

The Hall of Fame Junior Nationals will conclude on Sunday.