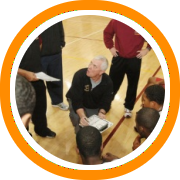 One of the nation's best high school teams came into New England this week to compete with three local MIAA teams in the Garden City Classic.  Legendary head coach Bob Hurley and his St. Anthony's squad were as good as advertised as they claimed the tournament title on Thursday.

The team lived up to the hype as they came out to a 19-4 lead in the first quarter. Newton North’s Avi Adler-Cohen had all four of the team’s first quarter points on a free throw and a three-pointer. Adler-Cohen, who recently committed to Union College, led the Tigers with 11 points. He never gave up on his team, despite the wide margin between them and the Friars. There is no doubt that he was a crowd favorite.

As for St. Anthony’s, it was Kyle Anderson who helped his team off to a hot start in the first quarter by dropping six quick and effortless points. Anderson stands at 6’8” and brings the ball up the court for the Friars on many possessions. His unbelievable ball skills helped get him 12 points.

Myles Mack also poured in 14 points off of various lay-ups and three-pointers. What made St. Anthony’s so dominant, however, wasn’t so much their offense. The length of players like Jimmy Hall and Jerome Frink helped swat shots and get many offensive rebounds. Hall had 20 points off of many put backs while Frink had a quiet 8 points.

While it was not a close game, Adler-Cohen, Mike Thorpe, Luke Westman, and Aaron Falzon held their own by not crumbling against the hyped team from New Jersey. They certainly could have used their captain Tevin Falzon, who has been out with an injury so far this season.

Led by juniors Matt Droney and Dan Powers, Catholic Memorial got a solid win over Newton South. The Knights held the lead for practically the entire game with Powers and Droney constantly attacking. Both have an excellent feel for the game and displayed great range and court vision. Powers had 37 points while Droney had 23 points.

Another guy who was impressive was freshman Aamahne Santos, who plays like a veteran. While undersized, he handles the ball with confidence and has many nice moves. Certainly a name to remember.

The game, however, wasn't all about CM. South's DJ Reid tried to keep his team in the game with his hot shooting, ending the game with 5 three-pointers and 27 points.