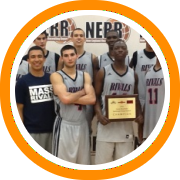 With his first full recruiting class at Providence College finally put to bed, Friars head coach Ed Cooley can look at his incoming class of 2012 and be very satisfied with his work.

Not only has he delivered arguably the nation's best incoming backcourt in Ricardo Ledo and Kris Dunn (not to mention Ian Baker), while also maintaining the commitment of under the radar sharp-shooter Josh Fortune, but Cooley also pounded the transfer market to land some terrific late value.

Former ESPN 100 big man Sidiki Johnson will become a member of the 2012 class for all intensive purposes when his three-and-a-half years of eligibility begin in December while ACC transfers Tyler Harris (North Carolina State) and Carson Desrosiers (Wake Forest) will have three and two years of eligibility remaining after they sit out the upcoming season.

While adding seven new faces for next season, Cooley and his staff have been simultaneously building a bridge to the future by laying groundwork with a number of New England's top young prospects.  On Tuesday, the Friars will be rewarded for their efforts as they'll host a number of local prospects from the Rivals Basketball Club.

Many of the same players are scheduled to visit UMass later in the week.