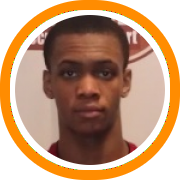 One of the most historic brands in basketball brought their Super Session Camp to the Reggie Lewis Center in Boston this past weekend.  On a usually quiet weekend in the basketball world, Five Star was able to showcase some top young talent from the New England region:

Jordan Hardwick- Hartwick had his full display of offensive moves today.  The 2017 Commonwealth Academy product has a nice, tight spin move in which he used early and often on Saturday.  Hartwick also has good patience in getting to the hoop, waiting for the right seam to open to attack the hoop.

Fredens Deneus- The 6'7'' forward was one of the more productive players here.  Deneus was aggressive in getting to the hoop with strong spin moves.  The powerful athlete also displayed a good up-fake in the post to get his defender to bite, clearing the way for several easy layups.

Derrick Ellis- The 5'9 rising sophomore will be attending Commonwealth Academy for this upcoming fall, and what an addition he will be.  His high-arching shot will be useful to free up space for the Commonwealth wings to penetrate, and Ellis will be lethal in drive & kick situations.  He is also very explosive for a young guard.

AJ Reeves- The incoming freshman at Brimmer & May has a bright future in NEPSAC Class AA.  He allows the game come to him and does not force his own offense if it is not there, a trait that does not come easily to young players.  Reeves possesses a high-arching floater that will come in handy this high school season.

Eamon Joyce- The stretch 4-man has a compact stroke that, with some more repetition, will be a serious weapon.  He is also not afraid to bang with other bigs down low in the paint.

Jair Johnson- Johnson was one of the better athletes in the gym on Saturday.  The rising junior from MacDuffie has a lot of talent and a will to win (evident by taking a charge late in his second game of the day to secure a win for his team).

Kyle Coughlin- The 2016 Beverly HS guard hit some big shots for his team throughout the day, knocking down three straight triples from the wing in one span.  He also showed the ability to get the ball to his teammates in positions to be successful.

Jovan Jones- Jones, who is repeating his freshman year at Belmont Hill for this upcoming year, is a wing with a good amount of potential.  He plays hard at all times (including running the floor for easy buckets) and works hard on his game during stations.

Rayshon Miller- The 2015 guard from Latin Academy had a solid outing on Saturday afternoon, nailing a couple jump shots in the midrange area.  He is also a strong guard who can get to the hoop quickly.

Brandon Hurst- Hurst has a very quick first step and a smooth one-dribble pull-up jumper.  He excelled in getting to the basket for easy opportunities throughout the camp.

Shyheim Hicks- The off guard is still getting back to full strength after suffering a meniscus tear in his knee, Hicks looked more comfortable than we have seen him in recent weeks.  He is starting to gain his explosiveness back, so look for big things from him in the months leading up to the beginning of the high school season.

Tanahj Pettway- The rising freshman guard is a smooth and efficient player who can get to the hoop in a number of ways.  Pettway will be attending Central Catholic High School in Lawrence, MA.