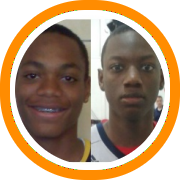 The 11th annual "Fitzy All Star Games" traditionally allows the best young players in New England to descend upon the Mount Ida College athletic center in Newton, Massachusetts for one day of game competition, and this year was no different.  In association with Hoop Mountain Inc. and the Boston Amateur Basketball Club (BABC), the "Fitzy Games" featured one game of the area's best twenty-six freshman, followed by two matchups of the premier New England programs.  Leo Papile's BABC squads took on Vin Pastore's Mass Rivals in the sophomore and junior exhibition games, where a "who's who" of top talent took the floor.

The first game of the day featured a close game throughout.  Coached by Brimmer & May's Tom Nelson, Green took a 5 point lead into halftime after a 3-pointer by Eric DAguanno.  However, it would be White (coached by Pingree School's Dave Latimer and Dean College's Joe Cabral) who would shoot the lights out in the second half.  They took the lead with 8 minutes to go, and wouldn't look back, riding stong performances Keyshawn Jacobs and Mike Nelson.

The follow players impressed with their play during the freshman game:

Ian Sistare - The Northfield Mount Hermon product stood out with his physical attributes and his feel for the game.  A big guard who has high-major potential, Sistare got to the hoop at will at times during the action.  His upper body strength allowed him to finish through contact consistantly.  He also displayed the shooting range to knock down the 3-pointer.  The game never moves too fast for him, as he was under control at all times (with and without the ball).  Look for Sistare to have a hugh summer running with the RI Hawks.

Saul Phiri - With one former Haverhill High player in the stands watching, a current Haverhill player took the court on Sunday.  Phiri's potential is through the roof, and looks to be the best player Haverhill has seen since Noah Vonleah, who was in the building to catch the action.  He possesses great size for a guard, with shoulders that look like they can add good muscle in the future.  His explosiveness is not something that can be ignored, as he proved to be deadly heading to the hoop.  Of any freshman here, Phiri has the highest ceiling, and should be one to watch for the Mass Rivals on the spring and summer circut.

Mike Nelson - Nelson never appeared to get rattled on the court.  He was always in control and excels at making the right pass at the right time.  The Bishop Feehan guard showed the exceptional ability to change speeds and actually go somewhere with his dribble, something many young players in high school struggle with.  He has a high arc on his jumpshot with a solid release point.

Nino Leone - The Pingree product is more than willing to bang with other bigs in the paint.  A beast on the boards, Leone's future is bright if he continues to work hard down low.  Bigs like this are hard to come by at such a young age.

Greg Kuakumensah - A quick and explosive leaper, Kuakumensah's athleticism was on display with his ability to blow by defenders and get to the hoop.  The athleticism is, without a doubt, there for him. Once his skill level catches up with his athleticism, he stock will take off.

Harry O'Neil -  One of the few true freshman post players to take the floor, O'Neil has very polished moves for a player his age.  His jump hook and spin move caught defenders off balance.  O'Neil is very good at staying balanced as he makes his move, and this should bode will for him as he continues to develop as a reliable post option.

Chandler Jones - Both with is frame and with his game, it is easy to see why Jones could be a special player.  The Springfield product has the size to play guard right now, but his growth may force him into the frontcourt one day.  He can add a lot of muscle to his frame because of his wide shoulders.  His smooth shooting stroke will complement him in whatever capacity he is used for the future.

Keyshawn Jacobs - Starring for Beaver Country Day, Jacobs already possesses impressive range on his shot.  He was able to get to the basket early in the game to keep his team in the game.

Ross Carter - The River's School big man has the ability to stretch the defense with a jumpshot that extends out to 18 feet.  The soft touch on his jumpshot suggests that this will be a great asset for Carter moving forward.

Justin Assad - Proving to be one of the more athletic freshmen we saw, Assad's jumping ability is impressive for such a young player.  Similar to Kuakumensah, the athleticism is there, and it should be exciting to see his game catch up.

Adham Floyd - The St. John's Shrewsbury guard has an excellent frame with room to bulk up as he progresses throughout high school.  A big guard with the range and fluid shot mechanics of Floyd will definately be an asset for St. John's in the future.

BABC blitzed the Rivals with their big guards' full-court pressure early and often, jumping out to a 13-0 lead and a 41-15 lead at the half.  The press proved too much for the Rivals to handle, as the backcourt of Aamahne Santos, Bruce Brown, Terrance Mann, and Curtis Cobb suffocated them defensively.

The Rivals got their revenge in the final game of the day.  In a much slower paced game, they jumped out to a quick lead in the first five minutes, then watched BABC's Bonzie Colson go off for 21 first half points as BABC led by 9 heading to the break.  Tightening up their defense, the Rivals finally took the lead at the 12:30 mark in the second half.  BABC would claw back, and the lead would change 6 times over the next few minutes.  But once Rivals got the lead back, they wouldn't give it up.  Jalen Adams was clutch down the stretch for Rivals, while Tyler Nelson's halfcourt heave off a steal rimmed in and out for BABC at the buzzer.


The following players turned out solid performances for both prestigious AAU programs throughout both the Sophomore and Junior games:

Bonzie Colson (BABC, 2014)- The slimmed-down Colson was one of the most impressive players in the gym.  His thinner build allowed him to be quicker with his post moves.  He showed the ability to play with his back to the basket or face-up.  The St. Andrew's big man's footwork is excellent for a big man, and he also displayed solid range and a soft touch on his jumpshot.

Kaleb Joseph (Rivals, 2014)- After a quiet first half, Joseph exploded in the second.  It was clear his goal was to be more aggressive in the second half, and it showed early as he netted 7 straight points right out of the gate.  Joseph can score in a variety of ways, with his quick first step being the catalyst for many of his moves to get into the paint.  His spin move is tight, and he proved he can finish through contact.

Bruce Brown (BABC, 2015)- Brown was in "take-over mode" in both games.  The 6'3'' Wakefield High guard attacked the basket with force, including several thunderous dunks.  His right hand hesitation move definately surprised Rivals defenders.  It will be a big summer on the national scene if Brown continues to stay aggressive on offense.

Jalen Adams (Rivals, 2014)- If Joseph carried Rivals in the second half, Adams kept them afloat in the first.  He started the game strong, with a fast-break layup, followed by a thunderous dunk.  Adams is a creative finisher at the rim, making it hard to try and block his shot; he can alter his finish in mid-air extremely effeciently.  He is a physical guard who uses his strength to gain leverage against defenders in getting to the basket.

Terance Mann (BABC, 2015)- Mann had the ball on a string all day.  The 6'5'' guard was in control throughout, showing great court vision and spinning off defenders to finish at the rim once he got in the lane.  He has great anticipation when jumping passing lanes for easy steals.  Physically, Mann has the height, length, and strength of a high major guard.

Mike Auger (Rivals, 2014)-  Whether Auger was tipping in missed shots, spinning to the hoop for a layup, or finishing a pass off penetration from Rivals' guards, the rugged forward keyed the Rivals inside attack.  He was strong on the defensive boards, and displayed solid post moves, giving their guards someone to throw the ball into the post.

Marcel Pettway (BABC, 2015)- The 6'6'' big man was very impressive in the Sophomore game.  He has a great feel for where his defender is and how to get a shot off in the post.  He stays on balance and uses his stregth to power through opponents in order to finish.

Curtis Cobb (BABC, 2015)- The high-flying guard showed an array of ways he can get to the hoop.  Once he gets there, he finishes strong, including one dunk over a Rivals guard in transition in the Sophomore game.  His handle also shows signs of improvement.  Look for his recruitment to pick up big time this summer.

Jeremy Miller (Rivals, 2015)- The New Hampton sophomore is a matchup nightmare.  At 6'9'', he can stretch the floor with his 3-point range.  His inside game is still developing, but he definately has the frame and physical tools to play down low, as well.  It will be exciting to watch Miller's development as potential turns into production.

Earl Stephen (BABC, 2015)- The little point guard from Wilbraham & Monson applied great on-ball pressure through both games.  Stephen also used his low center of gravity to get into the lane at will, and excelled in finding the open man when help defenders collapsed on him.

Tyonne Malone (Rivals, 2015)- The long and lanky Williston Northampton forward came alive in the second half of the Sophomore game.  Just a freshman, the southpaw attacks the basket relentlessly and can elevate for the finish.

Chris Baldwin (Rivals, 2015)- The Springfield Central big man was solid on the boards for Rivals.  He already has a solid build, with room to add much more muscle to his frame.

Aamahne Santos (BABC, 2015)- Currently playing for Redemption Christian Academy, Santos enjoyed coming back to the Boston area.  His explosive first step allowed him to blow by defenders in the halfcourt.  Once he got in the lane, he displayed a rangy crow-hop that covered a lot of ground, enabling him to get to the basket and finish.  His quick hands on defense allowed his BABC teammates to get consistant run-outs.