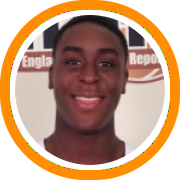 The Jackson Tigers (MS) must have missed the scouting report on Tyler Nelson as his hot shooting through the weekend continued. When given time and space, Nelson has established himself as one of the premier shooters in the EYBL (19-35 & 54% from 3 entering the game). Amazingly, Nelson was able to raise that percentage going 6-9 from deep and finishing with 24 points. While Nelson was manning the perimeter, Bonzie Colson continued his best Georges Niang impersonation finishing everything in the paint while showing a consistent mid-range jumper to the tone of 22 points, 11 rebounds and 4 blocks.

Again, Malik Newman (#4 in ESPN 25) tried to beat a New England based AAU team by himself but came up short, scoring 26 points on 20 field goal attempts. The second half defense of BABC (20 points & 36% FG allowed) proved to be the difference with Terance Mann using his length and athleticism to force tough shots. Meanwhile, Tyree Robinson and Bob Martin Jr. cleaned the glass to limit the Tigers to one shot. On the other end of the court, Johnny Joseph's (7 points, 8 assists, 2 rebounds and 2 steals) stellar lead guard play continued from Saturday afternoon as BABC's offense was back in proper form.

Despite opposing records entering the game (7-1 vs. 1-7), Baltimore Elite fought BABC tough early with aggressive perimeter defense. While Baltimore was able to limit BABC from behind the arc, they did not have an answer for Bonzie Colson in the paint. Once again, efficiency was the name of the game for Colson as he shot 9-13 from the field on his way to 18 points and 7 rebounds. Turning in one of the most impressive stat lines for a 5'8 point guard (7 points, 9 assists, 8 rebounds - 4 off rebs), Johnny Joseph ran the show in the second half as BABC was able to gain separation on the scoreboard.

Finishing Session #2 of the EYBL with an impressive 8-1 overall record, BABC currently sits tied for 3rd in the loaded C Division. During Session #3, teams will began play within their division as BABC squares off against 7-2 Meanstreets (IL) in Dallas.

In a weekend full of offense for Expressions, they hit full stride Sunday morning at 8:00 am. With weapons at every position, this squad is capable of scoring in bunches before their opposition has a chance to respond. Once again, Abdul-Malik Abu (14 points, 7 rebounds) showed off his diverse game from above the rim to stepping out on the perimeter. However, he was joined by a plethora of teammates who contributed offensively: Aaron Falzon - 14, Jared Wilson-Frame - 11, Dimitri Floras - 11, Jared Terrell 9.

Holding a 40-23 lead at the half, Expressions never looked back shooting 59% from the field and 60% from the 3 point line. Equally as impressive, each played who entered the game scored showing off their depth in the process.

With the usual following of high-major coaches in attendance, Jared Terrell used his last game in Hampton as center stage. Terrell assaulted the rims on several occasions including a punctuation at the end of the first half when the defense failed to show on a high ball screen. Terrell finished with an efficient 23 points and 6 rebounds in only 25 minutes of play. Despite the play of Terrell, Expressions only led by 7 at the half and needed one of their patented runs after intermission to break the game open. Again, it was the 3-ball that helped break the game open for Expressions as Aaron Falzon (9 points) showed off his deep range knocking down three 3's from behind the arc.

A very impressive start to their first two sessions of the 2013 EYBL Circuit, Expressions are tied for first in Division C along with Team Takeover (DC) at 9-0. They matchup with 6-3 Team Scan (NY) in their first game of Session #3 in Dallas.