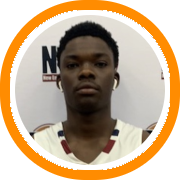 Emuobor is set to begin his first season at Brewster after attending Ravenscroft School in North Carolina.

He had an impressive high school season this past year, averaging 15.5 rebounds, 7 rebounds, and 3.7 steals for a Ravenscroft squad that made it to the NCISAA state tournament.

Emuobor had a solid showing on the Nike EYBL Circuit with Team CP3 as well. He had per game averages in the regular season of 7.9 points, 4.2 rebounds, and 1.0 steals for a team that won 11 games and finished third in Pool D.

Emubor shared some quotes with 247Sports as well. He said, “I committed to UCF because Coach Dawkins and his staff actually recruited me. They took the time to, not only know me as a basketball player, but as a person. I fit UCF’s play style and the culture as well. Moving into the Big 12, that’s a conference where guys with similar play styles like myself thrive.”

He becomes the seventh member of Brewster’s 2023 class who is committed to play division one college basketball next fall.