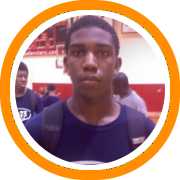 There were a number of players in the class of 2013 who took advantage of the big stage at Saturday’s New England Elite 75 Showcase – Frosh/Soph Edition to break-out and prove their potential in a big way.

Breakout performers fell into two distinct categories.  First, there were those players who have improved greatly in a relatively short amount of time and taken their game to new levels.  Second, there were prospects that we hadn’t seen before, either because they are brand new to the region or because they were previously flying under the radar, who made a great first impression.

Today we’ll take a look at the most improved list and tomorrow we’ll explore some of the region’s best newcomers in our final recap from last weekend’s Elite 75 Frosh/Soph Edition.

Matt Cimino, Cheverus – The Maine native’s combination of size and skill was always intriguing, but since shooting up to 6’9” it has become even more impressive.  He looks a little like a young Evan Smotrycz with his length, three point range, and ability to run the floor, the only difference is that he’s a better rebounder than Smotrycz was at this stage.

Ikemefuna Ngwudo, Milton Academy – His game has progressed nicely within the last six months and his upside was one of the most immediately noticeable in the field.  A long 6’5” athlete, Ngwudo showed nice footwork and bounce skills facing up from the low post but even proved his prowess on the wing, slashing his way to the bucket at will.

Thomas Rivard, Worcester Academy – Perhaps no one was a more pleasant surprise this weekend than Rivard, who turned in one of the day’s most complete performances.  The Worcester Academy sophomore is long and skilled.  He dribbles, passes, and shoots, moves very well without the ball and has a chance to be special once he bulks up.

Kamari Robinson, Springfield Central – Robinson was one of the most physically dominant players in the field.  He utilized his powerful frame, good size, and athleticism to attack the rim at will, but what was notable was the improvement in his ball skills as he broke down his defender before bulling his way to the cup.

Garet Beal, Jonseport Beals – We liked Beal’s game the first time we saw him in June but were even more impressed this weekend as the skilled and strong swingman proved he could create his own offense even against more athletic wings.  He froze defenders with his dribble before going to his pull-up jumper and was very efficient with his bounces when going through the lane.

Sam Dowden, Andover – The Andover forward is an inch or two taller than he was a year ago, obviously more skilled, and equally strong and rugged inside the paint.  He rebounded on both ends, carved out space to finish around the rim, made dribble pull-ups, and handled the ball efficiently in the open floor.

Bernard Brantley, Stratford – He proved his worth quietly but convincingly during his freshman season but his game is now starting to make loud statements as he is an athletic guard with a complete two way game, scoring the ball and making decisions offensively and locking up opposing guards defensively.

Tim Butala, Fairfield Prep – A four man who can attack inside and out, Butala proved that he could hang with the best interior prospects in the field.  He has gotten noticeably stronger and consequently more productive inside the paint while continuing to be very skilled facing the basket from 15 feet and in.

Adrian Oliveira, Brimmer & May – He has developed a solid six foot frame for his point guard position and added a few noticeable dimensions to his game, using his jab step very effectively to create space, being very efficient with his dribble, and throwing the long lead pass in transition especially well.

Colin Pascoe, Suffield Academy – Pascoe is tremendously improved within the last year and impacts the game in a variety of different ways.  He has good size for his position, runs in transition and finishes with above average bounce, shoots well to 18 feet, sees the court and passes, and also defends multiple positions.

Jonathan Perez, Lowell – A power guard who has obviously taken his game to the next level, Perez is physically strong and very tough.  He is very good in the open floor, changing direction on a dime while going at full speed, very long through the lane, and able to pull-up when he his defender gets on their heels.

Shawn Strickland, Middletown – Strickland is a creative guard who showed good burst both in terms of his first step as well as his bounce inside the lane.  He has a good handle to compliment his physical gifts and is also capable of harassing the ball on the defensive end.

• Victor Udoji scored with a solid southpaw stroke or runners in lane and played bigger than his size on the glass.

• Malique McLaren showed deep range on his jumper, the handle to crossover his defender, and good passing ability.

• Zaman Kalilou has a nice perimeter skill set to go along with the quickness to get to the rim.

• Braxton Gulley Mabry is a physical interior presence who rebounds on both ends and changes shots inside the paint.

• Good Farah is a distributing point who maximizes his quickness by changing speeds while backcourt mate Kevawn Lord does his best work with his crossover move.

• Zach Petion is a quality young point guard for Boston Trinity showing a good handle, the ability to finish with both hands, and a capable jumper.