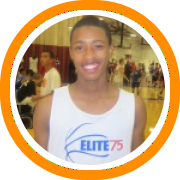 The Elite 75 Showcases have a proud tradition of hosting the best prospects in New England, but in particular the Elite 75 Frosh/Soph Edition has stood out as a breeding ground for the region’s top young prospects over the years.

Consider this – in both the rising junior and senior classes, over 90% of the ranked local prospects once starred at the Frosh/Soph.  Here are some of the more notable highlights:

Jalen Adams & Josh Sharma – Ironically, the future AAU teammates would both have breakout performances at the 2011 Elite 75 Frosh/Soph, showing a sign of things to come;

Terance Mann – A top prospect since he first arrived on the scene, the true senior debuted at the Elite 75 Frosh/Soph in 2011 during his freshman season;

Jarred Reuter – The Virginia bound big man was the best prospect in New England when he arrived as a freshman, and he proved it at the 2011 Elite 75 Showcase;

Steve Enoch – Enoch was one of the breakout performers at the 2012 Frosh/Soph and returned only 10 months later at the Elite 75 Showcase to show off his rapid progression;

Jeremy Miller – He was another top prospect out of the middle school ranks and debuted in the Frosh/Soph in 2010 after previously attending the Junior Elite 75 Showcase.

Bruce Brown – His first appearance came in 2011 when he was an up-and-comer for Wakefield while last year’s performance was full of signs of impending national breakout;

Terrell Brown – He was a long and skinny six-foot-six forward back in 2012 but he screamed of long term potential and stood out as a rising prospect;

K.J. Santos – The Illinois native had only been in New England for a matter of weeks before arriving at last year’s Frosh/Soph and proving why he would be one of the region’s best new prospects;

A.J. Brodeur – It was back in 2011, when he was at Algonquin Regional, that Brodeur first put New England on notice with his big performance at the Frosh/Soph;

Wenyen Gabriel – Three years, four inches, and maybe 30 pounds ago, Gabriel’s potential was noteworthy at the Frosh/Soph long before he was a recognized high-major  prospect;

Tyrique Jones – One of this spring’s biggest stock-risers was also one of the biggest stories to come out of the 2012 Frosh/Soph when he was the best of the young big men in attendance;

Ian Sistare – Another alum of the 2011 Frosh/Soph, Sistare stood out even then as one of the top guards in attendance and the best of the best in New Hampshire.

The 7th annual Elite 75 – Frosh/Soph Edition is set to return two weeks from tomorrow, on Sunday September 14th, at the University Sports Complex in Hanover, Massachusetts.  Nominations are currently being accepted (Elite75@NewEnglandRecruitingReport.com) for what promises to again be the premier event for New England’s top underclassmen.