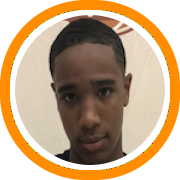 One of the things that we notice every year at the Elite 75 Frosh/Soph is the difference between freshmen and sophomores.

Sophomores aren't just a year older but they've got a year of high school experience under their belt and more often than not that year makes a huge difference.

Most of the freshmen are only just starting to develop physically and while you'll see glimpses of early talent, they're a ways away and about to go through a huge year of development.

With that in mind, we'll start our 2022 recaps with some of the physically bigger players in attendance. That isn't to classify these players by position yet, because hopefully these players haven't been pigeon holed by position through the youth levels.

Shy Odom, Beaver Country Day - The biggest name in New England’s incoming freshman class, Odom lived up to the hype on Saturday. He’s physically head and shoulders above the rest of the class with great perimeter size and a powerful body. He also has some finesse to his game though with a good shooting stroke, multiple ways to get to the rim, and soft hands.

TJ Power, St. John Shrewsbury – The 6’6 freshman had one of the breakout performances of the night, showing supreme versatility while running the floor, showing a passing instinct, utilizing his length, and demonstrating great natural instincts.

Keyonte Beals, Rectory – The Canadian native is already built like a man and coming off a performance at the CP3 camp in North Carolina. He’s vocal, plays with an attacking mentality, and can just physically overwhelm his competition on both ends.

Ahamdou Ndiaye, St. Joseph Prep – The budding frontcourt prospect has good size at an early age and ability to crash the glass, but there’s versatility in his future as he can put the ball on the floor and has touch to develop.

Avery Hinnant, Sacred Heart - Another talented young prospect at Sacred Heart (CT), Hinnant is a high energy forward with a long and strong build. He runs the floor well, keeps the ball high, is aggressive on the glass, and maximizes his size inside.

Matt Curtis, Northwest Catholic – Another incoming freshman who arrives with a big reputation from the middle school ranks, Curtis is a big guard who has the potential to play multiple perimeter positions and score the ball in a variety of ways.

Mar'rion Jackson, Hillhouse – A true big man, Jackson is built like an offensive line-man and takes no prisoners inside the paint. He creates space and is absolutely immovable and impossible to stop when he gets a deep catch.

Hayden Abdullah, E.O. Smith – A lanky 6’6 big man with a bright future, Abdullah has good footwork in the post, a frame that is only just beginning to fill out, an already advanced interior scoring package, and plenty of upside still left to discover.

Ethan Daleba, City on the Hill – A very athletic wing with a high motor, Daleba is still on the raw side but he already goes in transition and can create offense from his defense.

Desmond Claude, St. Thomas More – A repeat freshman who played big minutes on one of the biggest stages in the CIAC last year, Claude is well-built with an attacking mentality, solid skill set, and finishing ability.

Jean Marc Togodgue, Indian Mountain – Already built with broad shoulders and a chiseled frame, the Indian Mountain product has the motor and intensity to match his physical profile.

Max Poulton, Rivers – The freshman forward had the gym buzzing with a shooting display at one point on Saturday as he showed his shot-making ability by drilling four threes in just a matter of minutes.

Sam Okunlola, Thayer Academy – A man among boys, Okunlola is powerful, tough, and a source of constant energy. Opposing players bounce off his in the paint as he imposes his will on the glass and at the rim.

Owen Moreira, St. John’s Shrewsbury - He stood out by making plays that translate levels. Whether it was a curl into a tough finish, his length on the wing, or sense of how to play, the maturity of his floor game and overall feel for the game stood out.

Marvin Musiime-Kamali, Thayer Academy – The 6’3 freshmen made his mark on the glass. He was extremely active, able to get his hands on all types of balls off the rim. He’s a capable scorer from the mid-range and in and will only continue to improve as his body and skill set evolve.

Josiah Riebe, Randolph - He has good size at 6'3 along with wide shoulders and good touch inside that allow him to create space, finish plays, and score in the paint.