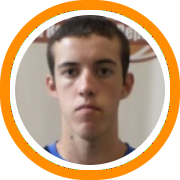 Yesterday, we profiled some of the top frontcourt standouts, here’s a look at some of the most impressive wings in action:

Bailey Patella, Vermont Academy 2017 - An athletic 6-foot-5 wing with a 6-foot-9 wingspan, Patella has great length that allows him to guard every position except center. Offensively he showed the ability to bring the ball up the floor and make plays for himself and others. He scored from all 3 ranges but his athleticism at the rim is what really shone during the showcase and explains why he has caught college coaches’ eyes in his high school and grassroots career.

Tyreek Scott-Grayson, Suffield Academy 2017 - Scott-Grayson is a pure athlete who can take it to the rim and make pinpoint passes. Combine that with the ability to make the occasional outside three, a staggering wingspan and the versatility to operate from virtually any spot on the floor and he had upside written all over him.

Javon Taylor, Beaver Country Day 2017 - Taylor continues to improve his court vision and ball handling along with his scoring ability. At 6-foot-3 with a strong body and academic background, Taylor can play any of the three perimeter positions and is very efficient and astute about taking care of the ball.

Jonathan Cenescar, Cambridge 2017 - Pick your catch phrase, he "was a man among boys" or "got downhill" at every opportunity, but the simple reality is that Cenescar's power and sheer force when he put the ball on the floor was unparalleled and so when he made up his mind to attack, there wasn't much his opponents could do to stop him.

Corey Romich, Vermont Academy 2017 – A shot-maker extraodinaire who spent the spring as a top marksmen in the EYBL, Romich continued to show his dominant niche in this setting while also having the opportunity to demonstrate his other assets. He’s developed a strong body, has a high I.Q. and puts the ball on the floor effectively in straight lines.

DeAndre Leslie, Commonwealth Academy 2017 – A strong and athletic driver, Leslie showed he was a top level competitor and potential multi-positional player. To go along with his inside ability, Leslie showed off an ability to stretch the floor with a developing perimeter game.

Dakota Wheeler, Wilbraham & Monson 2017 – Wheeler’s shooting ability has earned him recognition at various points this spring, but Monday was perhaps his most impressive showing yet. He made good use of his 6-foot-5 frame, grabbed boards and even used his body to get to the rim some off the bounce.

Adonis Williams, Brooks 2017 – A well-built wing with a balanced floor game, Williams was productive right off the bat in breakdown drills as he demonstrated his ability to play in structure and also be a scoring threat in various actions. He can slash to the rim, knock down open shots and also be a willing ball mover.

Andrew Jaworski, Tolland 2017 – A thick and powerful athlete, Jaworski distinguished himself on Monday by using his frame to dominate the game for stretches. He creates space in the post, overpowers smaller wings off the dribble, can mix in the occasional euro step and outmuscle taller players for rebounds.

Brandon Kolek, Cumberland 2017 – With a shooting release that is quick and compact as it is aligned and mechanically sound, Kolek makes his living from behind the three-point line. Put in ball-screen or drive and kick type action he’s one of the best floor spacers and quick shot-makers around. He also has excellent perimeter size.

Thaddeus Allen, Pope John 2017 - An athletic 6-foot-4 wing who is great creating off the bounce. Allen, when in the lane, threw down some high level dunks and other finishes. With his athleticism he is able to guard multiple positions. His game should attract the attention of college coaches this summer.

Liam Jacobs, Putnam Science 2017 – The incoming PSA forward from nearby eastern Connecticut made a name for himself Monday with soft hands and the ability to stretch the floor. He can score using both hands and make the long range three-ball when given space.

Austin Jones, St. Paul’s 2017 – He’s aces the look test at first glance as it is obvious that Jones has great size for the perimeter and an ideal basketball body. Keep watching and you’ll see increasingly consistent flashes as he’ll make some high level plays in the open floor, crash the glass some and make enough open shots. With a post-graduate year potentially in his future, his upside remains very high.

Colin Donovan, Choate 2017 - Very skilled with long arms, Donovan has consistently impressed this spring. He owns a beautiful shooting stroke off both the catch and the dribble, and plays much bigger than his listed height due to his long arms. He's also a high academic prospect who is sure to appeal to a number of top institutions.

Aurdric Sandoval, Vermont Academy 2018 – An athletic wing who gets after it on the defensive end and creates havoc with his length, Sandoval is always in attack mode and really shines in the open court. He also has the potential to be a lock-down half-court defender.

Sean Christy, St.Andrews 2018 – One of the few rising juniors in the field, Christy didn't let any of the seniors intimidate him. The 6'4'' guard made multiple jumpers from downtown, got to the rim some and even moved well without the ball, finishing plays off the catch with both hands around the rim.