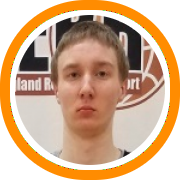 There were too many players to highlight in just one recap, so our first look back at the showcase’s standouts will begin in the frontcourt where Marcus Santos Silva set the tone from the very first moment of action.

From a recruiting standpoint, there was no reason for Santos Silva to be in attendance. He already holds offers in the ACC and Big 12 after his breakout spring, and so there wasn’t anything to be gained from playing in front of D2 and D3 coaches, but he nonetheless came, asserted his will and showed why he has established himself as one of the premier big men in New England.

His powerful frame coupled by his long-arms (his wingspan was measured at 7-feet at the event), magnetic hands and unprecedented confidence allowed him to go to work from start to finish. Santos Silva wasn’t the only big man to stand out however. Here’s a look at some of the others.

Patrick Harding, Fairfield Prep 2017 – With a handful of D1 offers already in hand, Harding is another guy who NE-10 coaches were gazing out with thoughts of what might have been. He has the size and width to work in the post and has the length to rebound against anyone. His most valuable attribute however is his skill set as he can hit long jumpers and thread in backdoor passes like few other bigs.

Garrett Stephenson, Suffield Academy 2017 – If Harding set himself apart with his skill level, Stephenson did so with his footwork. His ability to turn, pivot and step-around defenders would have made Kevin McHale proud as he was virtually toying with defenders at various points. Combine that with the ability to use both hands around the rim and he was as good of a low post scorer as there was.

Jonah St. Clair, Malden Catholic 2017 – St. Clair plays extremely hard and was diving for loose balls and giving his body up all over the court during the showcase. St. Clair is not just a hustle guy though. The wing also drove and threw down dunks and was fading away while hitting midrange jumpers.

Spencer Kendall, Lexington High School 2017 – The 6’5 wing was one of the breakout stars of the showcase. College coaches were intrigued with his size and athleticism, but also displayed a nice skill set that featured good ball handling and good form on his jump shot.

Stone McLaren, Brimmer & May 2018 – The strong forward started the day in 2 on 2 3 on 3 and 4 on 4 drills with a flourish, battling on the glass with his strength and athleticism. McLaren has a great feel for the game and was finishing around the rim off offensive rebounds and dump passes. McLaren is a proficient screener and roller and gets big on the catch in the post.

Sunny Piplani, Choate 2017 – A mobile 6 foot 8 C/F Piplani provide his worth on both the offensive and defensive end. He showed good lateral quickness which allowed him to guard on the perimeter along with a high defensive IQ when in the post. On the offensive end he used his speed to get to the basket for layups while occasionally knocking down the open three.

Isaiah Laurent, New Mission 2017 – A recent New Mission graduate who is expected to prep next year, Laurent was a key cog in a state championship run thanks to his efficiency this year but with long limbs, solid athleticism and a tremendous frame there is still plenty of upside left for him to discover. He was definitely a guy who college coaches took notice of.

Fru Che, Brooks 2017 – Mr.Che was up to his usual antics on Monday throwing down a slam in traffic in his second game. His consistency expanding game now includes a tight handle and an ability to score off of both of his hands. He should be a very enticing player to watch going forward.

Matt Morrow, Leceister 2017 – A wide-bodied big man with a 6-foot-8 frame, Morrow first caught our attention at last month’s Super 16 Showcase. He continued to intrigue at Monday’s Elite 75 with his vast array of post moves and ability to eat up space defensively and gobble boards in bunches.

Lucas Curran, Master’s School (NY) 2017 – Long and athletic, this 6-foot-5 perimeter forward makes pinpoint passes, can stretch the floor with the three-ball, handle in the open floor and make hard straight line drives to the rim. He made the trip from New York, but it paid off, as college coaches were calling his name all day long.

John Bella-Hunter, Amherst 2017 – The 6-foot-6 post passer makes his impact known and played his way into the NERR prospect database as a result. He’s long, mobile and active and consequent able to out-maneuver bigger post players both around the rim and on the glass.

Justin Connolly, Brooks 2018 – The 6-foot-8 big man will transfer into the Brooks School next year and join the class of 2018 and thus far it looks like that could very well get him looks at the scholarship level. A skilled big man who stretches opposing defenses to the perimeter and has a good feel for the game, he’ll benefit from the extra year to build his body.

Matt Valles, Old Rochester 2017 – Another big man who made a name for himself on Monday, Valles is a good athlete whose mobility and ability to cover the court might prove to be his calling card at his size. Offensively, he’s still a bit of a work in progress, but he can score around the rim and knock down an occasional mid-range jumper.

Oskar Coulter, Newton South 2017 – He’s admittedly a bit of a work in progress right now but nonetheless an intriguing talent with a clear upside. At 6-foot-6 he has a combination of size and skill that is going to translate to the next level once he fills out his frame and becomes more consistent playing through contact.