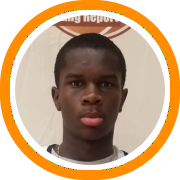 We’ve coverage from last week’s Elite 75 College Showcase has already included a few wings as E.J. Dambreville and Matt Niemczura were among the breakout prospects of the event while D.J. Frechette took his game to new levels.

But there were plenty of others that seized the opportunity to impress the 70 college coaches in attendance as well. Here’s a look at some of the most notable:

Beau Smith, Trinity Pawling – The well-rounded guard literally did it all and walked away with new recruitment from both the NE-10 and NESCAC as a result. He knocked down a bunch of shots, showed he could initiate offense as a true guard, brought smaller defenders to the block, and even showed some bounce.

Jon Lyons, Vermont Academy – He’s had a really impressive spring showing off his scoring prowess, but he demonstrated some enhanced playmaking ability on Thursday night as he was creating for his teammates more than we have seen and throwing numerous dimes. He could be well on his way to becoming a true combo-guard.

Dimitry Moise, Trinity Catholic – Moise made a case for himself as a serious scholarship level candidate. He’s super athletic with a high motor. He was active defensively as well as on the glass and able to knock down open jumpers as well. Overall, he fits the prototype of an athletic “three-and-D” type wing in the making.

Cam Sells, Springfield Commonwealth Academy – With good size and strength on the wing, Sells has a good physical profile. He’s also a quality one-on-one scorer who can create his own shot, slash to the rim, and proved himself to capable of getting buckets at all three levels.

Brian Wright-Kinsey, Brooks – The southpaw had a well-rounded night and was able to show his entire offensive repertoire. He began by knocking down his trademark three-point shots but began to utilize his athleticism more on both ends as the event went on, both attacking the rim and getting after it defensively.

Will Phelan, St. Sebastian’s – It has been a productive few months for Phelan, who followed up a strong junior season by making a name for himself this spring. He was one of the more versatile players in the Elite 75 field. He could play and defend multiple positions, had the toughness to bang with bigger guys, and some lift around Brandon Kolek,, St. Andrew’s – He was one of the top scoring threats in the RIIL last year as a senior and will now get to test his abilities against a higher level of competition during his post-graduate year. A knockdown shooter with very good perimeter size, he can make jumpers in bunches without much separation.

Austin Jones, St. Paul Catholic – An unsigned senior who is considering doing a post-grad year, Jones is an athletic and fluid wing with a good build and versatile tools. He has the strong body to finish through contact, can knock down an open three, and crash the glass.

Sean Christy, St. Andrew’s – Shooters keep shooting and that’s exactly what Christy did. If they weren’t falling early they certainly were late as he got hot down the stretch. He already had coaches’ attention at that point as well since his tireless motor helped differentiate him early in the event.

Sean Conway, Fairfield Warde – A smart and solid player who plays within himself and has the perimeter size to play multiple positions, Conway was a multi-faceted offensive threat as well. He showed deep range on his jumper and was very smooth creating within the flow of the game. He certainly started to make a name for himself.

Jake Sullivan, Choate – Another Connecticut product that started to make a name for himself, Sullivan is headed to Choate for a post-grad year and might be just getting started. He has a good looking jumper from behind the arc, showed a high I.Q., and was also a very good rebounder from the perimeter.

Javon Taylor, Bradford Christian – The rising post-grad is well-known for his work ethic and he was impressive putting the ball on the floor and utilizing his size and length on the perimeter here. Most noteworthy though was his passing ability as he was getting into the lane and making plays for others.

Tayjaun McKenzie, Winthrop – He’s probably best known for his ability to score the ball and he continued to play with an offensive swagger here. But what was more impressive was how hard he competed. He was physically assertive on both ends and utilized his length well defensively.

Michael Mozzicato, Wethersfield – The lanky southpaw is known for stuffing all columns of the stat sheet during the high school season and was also one of the more hard-nosed and coach-able guys in attendance. Put 20 pounds of muscle on him and he’ll be a different player.

Precious Okoh, Brockton – Okoh came out and played with a chip on his shoulder as if he had something to prove, and by the time the night was done he had definitely proven himself. He was aggressive from start to finish and stood out with his ability to shoot off the dribble.

Tyler Spencer, Pembroke – He played hard and smart. He was all over the court and earned his fair share of floor burns diving for loose balls. He also showed a high basketball I.Q. and good first step that allowed him to get paint touches all night long.

Tahj Brown, Master’s – Brown is a smooth wing who plays with a quality motor. He has fluid length and athleticism slashing to the rim, used his body to finish well, and knocked down his fair share of open shots from the perimeter.

Abdulraheem Abuissa, Williston Northampton – A strong and physical player on the perimeter, Abuissa attacked the rim effectively while also showing off a solid skill set.

Enasj Jones, Wilbur Cross – One of the younger players in the field, this rising junior held his own with consistently high energy. He was active from start to finish and particularly effective defending the ball.

Charlie Deacon, Tilton – A strong bodied wing who is headed to Tilton next year, Deacon distinguished himself as a powerful athlete with a nice mid-range jumper.

Dylan Trombley, Moriah Central – At 6-foot-3, Trombley has good versatility on the perimeter and the ability to play multiple positions. He has beautiful shooting mechanics and the potential to evolve into a true shot-maker.

Colin Boucher, Xavier – Another rising junior, Boucher stood out with his willingness to do all of the little things against the more veteran competition.