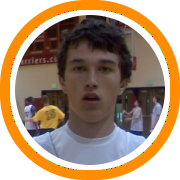 The race for the top spot is a tight one in Vermont’s class of 2011 but there’s a new number one in our minds as Jake Donnelly has played well enough over the last few months to earn that distinction.

The six-foot-two guard from Champlain Valley Union High School was impressive when we watched this summer, a standout at the Lone Wolf College Showcase in August, and off to a successful start to the high school season.

Previous number one Josh Varney is a very close second as the six-foot-seven big man has all the physical tools to have a very successful career at the next level.

Another physically talented player is Evan Tullar, currently the third ranked player in the state.  In Vermont, the Spaulding forward plays above the rim like few others can and if he can translate that to the summer circuit when going against better competition he will have a chance for a scholarship.

Six-foot-seven center Alex Snyder teams with Davine at Rutland and the big fella has put up some big numbers to start the season and is on the cusp on being a top five player in the state if he can continue to produce at the same level.

Seventh ranked Ben Ferris was the player of the week in Vermont last week after leading Essex to an upset of Burlington and going toe to toe with Joe O’Shea for 22 points a piece.

Clayton Palmer and Ryan Tatro are two big men, from Mount Anthony Union and Hazen respectively, who come in at eight and nine while Stowe’s Jaren Scrubb grabs the final seat at the table as the tenth ranked player in Vermont’s junior class.