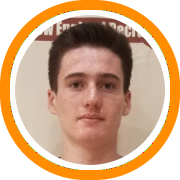 Cushing Academy post-graduate guard Sean Conway made a verbal commitment to VMI after visiting their campus earlier this week.

Conway came to Cushing after graduating from Fairfield Warde High School in Connecticut where he had a storied career. He finished as the school's all-time leading scorer with over 1,100 career points and was named the FCIAC's Player of the Year as a senior.

He came up the ranks playing for his father on the AAU circuit with CT PHD but starred with Crown Athletics last summer.

This year at Cushing, he averaged 12 points per game for the Penguins but was also the team's leading rebounder. He was at his best in the post-season though, averaging 21 points and 7 rebounds per game to help lead Cushing back to the finals of the NEPSAC Class AA tournament.

"Sean raised the bar when it came to our 'better every day' motto," said Cushing Academy head coach James Cormier. "He is a tireless worker and his game is only going to improve as a result. There is no doubt in my mind that Sean Conway's best basketball is ahead of him and I'm happy he found a school that appreciates what he can bring to the table."

Conway is a high-level shot-maker from behind the three-point line who expanded his overall offensive repertoire this year while building up his body.

Below are some of his highlights from the winter season.