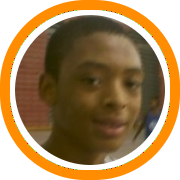 In the fourth meeting between these two clubs this year, Cromwell defeated Hyde Leadership Academy 40-34 to win the class S state championship.  With neither team able to find their offensive rhythm throughout much of the game, this match-up played out like a chess match with Hyde willing to milk the clock on numerous possessions until Cromwell was forced to come out of their 2-3 zone.  The game was tied at 32 with just over two minutes to play until Isaiah Salafia made one of his many quick slashes to the rim before finding Austin Foose in the short corner for a ten footer.  Upon regaining possession, now it was Cromwell’s turn to hold the ball as it looked like they were going to try and drain the entire minute and a half off the clock while clinging to only a two point lead.  Panthers head coach John Pinone was forced to call three time-outs in a 30 second span as his team came close to turning it over on a number of occasions.  Finally, Hyde forced their hand by fouling Shawn Holley with 54 seconds left in the game.  The senior guard calmly knocked down both free-throws to give his team a 36-32 edge.  While Joe Lambert would score quickly for Hyde, Tyler Burkhart iced the game at the stripe, knocking down all four of his attempts in the last 30 seconds to finish with a game high 17 points.

Big players step up in big games and there is no game bigger than the state championship.  That’s why it was so appropriate that Josh Turner and Cory Andrews both played so well in this match-up.  Turner was a factor in several different areas as he was active defensively and on the glass, coming up with a number of steals and rebounds, while also using his dribble drive game to get himself to the free-throw line where he connected on 12 of his 18 points.  But no player was as dominant as Andrews, as Bloomfield simply didn’t have an answer for him in the paint as his size and quick leaping ability, along with some impressive footwork, helped him to 21 points and 15 rebounds.  Rashad Moore led the way for Bloomfied with 20 points and he really put the team on his back in the third quarter when the lead went back and forth between the two teams.  Denzel Jones stepped up for Bloomfield in the final quarter as he started to go to work around the rim, including a thunderous dunk that brought a huge reaction from the crowd.  Ultimately the game remained deadlocked throughout virtually the entire second half.  With 48 seconds left to play Sacred Heart clung to a 2 point lead.  After Effrin Ellison knocked down a pair of free-throws to push it to 4, Jones quickly returned the favor with a lay-in at the opposite end to again make it a 2 point game, this time with just 30 seconds to play.  But the final 30 seconds belonged to Turner as he made 2 free-throws, then stole Bloomfield’s inbounds pass only to be fouled again, where he officially iced the game at the free-throw line with another make.  Final score Sacred Heart 65 Bloomfield 59.

Torrington claimed a thrilling one point semi-final victory on Wednesday with a buzzer beater from Desmond Williams.  On Saturday night, they learned what it feels like to be on the other end of that verdict.  Behind yet another dominating performance from Jordan Williams (36 points, 13 rebounds, 9 blocks), Torrington held a fairly significant lead for almost the entire first half.  But the third quarter belonged to Bulkeley as they used their full court pressure defense to force the tempo of the game, cutting Torrington’s lead to 42-41 just prior to the end of the period.  It continued to go back and forth to start the second as Torrington was unable to capitalize on opportunities to pull ahead at the free-throw line.  Finally with 2:20 left on the clock, the game was tied at 52.  Moments later Deshawn Hamlet streaked through the middle of the lane and scored 2 of his team high 21 points with a runner that put Bulkeley up 3 with 34 seconds left to play.  With things looking like they were beginning to slip away from Torrington, Jordan Williams played the role of the hero once again as he scored two baskets on the inside to put his team back on top by a point.  But following his second bucket, with 5 seconds to play, Bulkeley quickly in-bounded the ball and got it to Brandon Jones who hit the game winning lay-up as the crowd went absolutely nuts!  It was an unfortunate ending for Williams, who has undoubtedly been CT’s most dominant player this year and couldn’t have done much more for his team tonight, but you have to be impressed by Bulkeley, once again, defying all odds and claiming the championships despite being the 17th seed.

Saturday’s nightcap featured the highly anticipated Windsor vs. Crosby contest for the LL title.  And the match-up didn’t disappoint as this one was closely contested for all 32 minutes.  But as close as it was, one team was always in control, as Windsor never trailed throughout the entire night.  Senior Doug Soutar was tremendous in the first half as he scored 17 points with a series of strong drives and some accurate shooting from the outside.  But that wasn’t the extent of his production as he also passed the ball well and picked up 5 first half rebounds.  But ultimately Windsor got contributions from a number of different places tonight.  Tyrus Weaver was also a spark plug to start, although he impacted the game early with his passing and later with his scoring.  It was a similar story for Steven Samuels and Adrian Satchell as this Windsor team played unselfish basketball throughout the course of the night while also turning in a great defensive effort.  Crosby’s Anthony Ireland continued to pace his team, scoring himself and creating opportunities for his teammates.  It all came down to the final possession, as Crosby had the ball down 3 with 3.8 seconds left on the clock.  As expected, the Bulldogs went to their star senior guard and Ireland almost came up with a miracle as he split two defenders with a behind the back dribble and then launched a three that looked to be online.  But the ball bounced off the back of the rim as time expired, giving Windsor a 72-69 win and the class LL state championship!  Soutar and Ireland finished with 26 a piece while Satchell added 17 and Samuels 14.