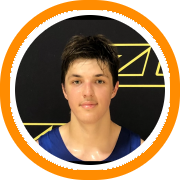 We will be releasing our new Connecticut 2023 rankings next. They consist of only players who are returning to the region. Once we have evaluated all the incoming prep prospects, we will have an updated release.

Gavin Griffiths, a forward from Kingswood-Oxford earned the top spot. The Rutgers commit proved to be one of the top long-range snipers not just in New England, but nationally. Papa Kante came in at number two. He is a skilled inside scorer who asserts his physicality on the glass.

The three and four spots went to Mouhamed Dioubate and Cam Estevez. Dioubate is a forward from Putnam Science Academy who rebounds well with his high motor/strong frame and has taken progressive steps offensively. Estevez is a guard from Canterbury School who was a summer stock-riser. The URI commit brings versatile playmaking skills while also being an improved three-point shooter.

Another PSA prospect on the list is Darryl Simmons at number eight. He is a guard who has a nice mix of competitiveness, playmaking, and on-ball defensive ability. Bucknell commit Brandon McCreesh comes next at the ninth spot. The guard from Hotchkiss School can stretch the floor from beyond the arc and shows glimpses of creating for others.

Jason James from Westminster School earned the thirteenth spot. He is a strong/athletic guard who is difficult to keep out of the lane and possesses playmaking ability on both ends. Rounding out the top fifteen is Justas Bardauskas from Loomis Chaffee School. The big man uses his explosiveness to be an effective finisher and rebounder.

Attached is a link to the full rankings: https://newenglandrecruitingreport.com/rankings/connecticut-class-of-2023