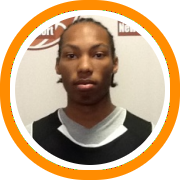 The New England Recruiting Report was at Roger Williams College on Saturday for the opening rounds of BasketBull’s Columbus Day Challenge.  With most of the u17 and open division teams not opening up until later in the day because of the SAT test, the daytime action enabled us to get a peak at a variety of young and under the radar talent.

The Connecticut Basketball Club has a talented young roster that ran away with some huge victories on Saturday.  Arkel Ager is a gifted young player who scored both inside and out while even showing some quality instincts for the game while Elijah Pemberton and KeAndre FAir, who both made names for themselves earlier this fall at the Elite 75 – Frosh/Soph, continued to stand out in the backcourt.  Sam Ibiezugbe, a six-foot-eleven freshman big man from the Master’s School, is still very raw and just beginning to learn the game but definitely somebody who has upside down the road.

Saturday was also a first glimpse at a Team Connecticut squad that had nice young talent.  Roy Kane is the most notable player on the roster, and he backed up that reputation by going to work along the baselines when we watched.  Trumbull freshman guard Matt Turner is a shifty playmaker who headlined the rest of the talented young core that included some 8th graders who will surely catch the Hoop Rootz spotlight as the season goes on.

The New England Playaz debuted new squads in the u15 and u16 divisions.  St. Mark’s sophomore guard Marcos Echeverria was one of the most pleasant surprises of the day as he created tempo by making plays in the open floor while also showing a quick trigger from behind the arc.  Aaron McLean also looked good for the squad flying around the rim while Tyree Weston turned in an efficient performance in the backcourt.

Chan Williams-Bey is a long and athletic swingman for Connecticut Select’s u16 squad but it was the u17 squad that attracted one of the biggest followings of college coaches throughout the day.  Trevon Gibbs was a force inside the lane while Husani Foote and Isaac Vann emerged as two talented prospects to keep an eye on moving forward.  Foote is a long and athletic six-foot-four swingman from Naugatuck High School and Vann a big guard from Bunnell High School.  St. Joe’s sniper Johnny Dzurenda and Cheshire point guard Collin Jordan also made notable contributions.

Other u17/open teams to get underway earlier in the day included Metro Boston, Blackstone Valley Chaos, Lone Wolf, and BasketBull.  Metro Boston was led by the inside-out tandem of Travis Descoteaux and Paul Brooks while Chaos had a similarly strong one-two punch in Colin Richey and Isaiah Nelsen.  Lone Wolf has an intriguing backcourt trio with a playmaking guard in Pavin Parrish surrounded by a pair of shooters in Ryan Booth and Brendan OShea.  BasketBull sported two teams with many of western Massachusetts’ top prospects including New Leadership senior guard Joe Crapps and Minnechaug senior guard Lance Hill.

The Columbus Day Challenge is set to conclude on Sunday with champions being crowned in all divisions at Roger Williams College.