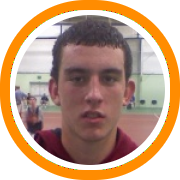 Lynn English comes into the championship riding a wave of momentum.  First, they scored a 71-60 upset victory over the state’s #1 ranked team Central Catholic in the finals of the North Division.  In the state semi-finals they again overcame the odds by knocking off previously undefeated Brockton in overtime.  Junior guard Ryan Woumn has been the dominant scorer in English’s up-tempo attack, scoring a career high 39 against Brockton.  Tempo will be critical to the outcome of the final as St. John’s will look to slow it down and utilize their size up front.  Dartmouth bound big man Matt Labove anchors the interior for St. John’s, but he gets plenty of help from his brother, 6’6” Chad.  Junior guard Anthony Trapasso anchors the perimeter.  St. John’s knocked off Springfield Central 67-54 in Tuesday’s semi-finals and claimed the central division title with a win over Worcester North.

Milton freshman Rene Castro is becoming a star at an early age.  He scored 23 points in the semi-final victory over Milton, including the game winner with ten seconds left to give his team a 70-69 win.  But senior Marcus McDermott has been getting it done all year long averaging 21 points, 7 assists, and 6 rebounds.  The duo will lead Milton against Hoosac Valley who advanced to the finals by winning the west division and then knocking off St. Bernard’s 66-52 in Tuesday’s semi-final.  Robbie Burke was the team’s impact performer on Tuesday night scoring 22 points, grabbing 7 rebounds, and handing out 4 assists.  Milton is likely the favorite heading into this one but Milton is plenty capable if they’re playing their best basketball.

This is a rematch of a game that was played earlier in the year at the Hoophall Classic.  Watertown won that one convincingly, even without Cory Stockmal in the line-up after he had sprained his ankle a night earlier.  Behind Cory and Kyle Stockmal, Watertown is one of the best shooting teams around and they’ll again look to counter Sabis’ pressure by spreading the floor and making shots.  Sabis’ junior star Andre King had an uncharacteristically bad game the first time these two squared off and you can bet he’ll have retribution on his mind as Sabis will look to push the tempo of this game and use their athleticism to their advantage.

Bishop Hendricken will look to win their sixth consecutive state title, but they’ll have their work cut out for them as they face Frank Robinson, Billy Soriano, and Mount Pleasant.  MP scored a dramatic semi-final win over Cranston East as Robinson hit the go ahead pull-up with under a minute to play and Soriano iced the 71-68 decision at the free-throw line.  Hendricken had an easy time with Cranston West in the other semi-final, drilling Cranston West 82-39 behind 24 points from Billy Baron.  It is only fitting that Mount Pleasant and Bishop Hendricken face in the final as they have been the state’s top two teams all season long and feature a number of Rhode Island’s best individual talents.

Classical came into the season as the defending champions and heavy favorite in division II, but they’re not playing their best basketball right now after barely escaping a potential upset in the semi-finals.  Narragansett also had a tough semi-final night, earning a narrow win over Coventry 55-52.  Looking ahead to the final, both teams have star power in the backcourt with Classical’s Lavon Waite and Narragansett’s Jay Jeannotte.  Classical will have the advantage in the frontcourt with Ashton Watkins and they also appear to be the deeper of the two teams.  Narragansett will have to be the smarter and more disciplined team in order to compensate.

Central Falls comes into the final riding a 19 game winning streak.  They scored a convincing semi-final win over Mount St. Charles and will use a similar strategy in the final as they’ll look to create tempo with their trapping defensive and score in the open court.  Moses Brown wasn’t quite as sharp in their semi-final win over North Smithfield, but will rely on Anjuwon Spence to get them going in the final.