Bonilla’s Hard Work Leads Him to Becoming a Black Bear 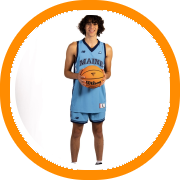 Bonilla began his career at Central Catholic High School under head coach John Walsh. He was swing player on Varsity during his freshman year but lost his whole sophomore season due to COVID-19.

Bonilla made the most of the following year, being one of the key cogs for a Raider team that won the 2021 MVC Division 1 Title.

Following his standout junior year, he decided to transfer to BCA and reclassify into 2023. Bonilla made a smooth transition to a higher level of competition in NEPSAC AA for the Sentinels.

He was an important part of the rotation for a team that earned a National Prep ranking for the first time in its school’s history.

Over on the AAU circuit, Bonilla was part of a Mass Rivals team that went 15-4 in the Adidas 3SSB regular season and capped off July winning the 3SSB Open Championship in Los Angeles, California.

“Isaac is a workaholic,” said BCA and Mass Rivals head coach Vin Pastore. “He is self made and became the threat he is on the basketball court by real hard work. He loves being in the gym, getting his shots up, and getting better. Isaac is an exceptional shooter who takes and makes the most difficult shots at a high rate. Because defenses cannot take their eye off of Isaac, he stretches the floor, and thus makes the game easier for his teammates.”

“I have coached a lot of talented basketball players in my day, but if I needed someone to make a last second shot, there is nobody I would pick to take it over him. Added to that, Isaac is a great kid, embraces hard coaching, and is terrific teammate. Coach Markwood and Coach Gash have done a great job recruiting Isaac and have picked up a game changer for the University of Maine.”

Bonilla becomes the first player to finalize their college plans in BCA’s 2023 class.