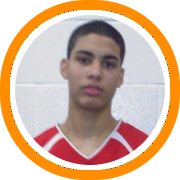 The swing positions are always among the most densely populated when it comes to recruiting lists as the two and three spots are far less specialized than the point or frontcourt.  New England’s list of best available swingmen is reflective of this as there are plenty of talented players still looking for homes.

D.J. Peterson, Lee Academy – Versatility is Peterson’s best strength as he can not only play three different  positions offensively, but defensively as well.  Efficient may be the best word to describe him offensively as his ability to shoot, pass, and handle allows him to take whatever the defense gives.  Combine that with a long-ball that has been developed into a weapon and you have a player who is ready to impact a college program next year.

Damion Lee, St. Thomas More – A high level athlete with a college ready body, Lee is ideally suited for an up-tempo system because of how well he runs and finishes in the open floor.  But far from a one dimensional athlete, he has shot the ball with consistency, shown himself to be an excellent perimeter rebounder, defended very capably, and also proven that he is capable of creating his own shot in the half court.

Desmond Williams, Putnam Science Academy – At this time last year he was coming off a big senior year at Torrington High School but still didn’t have any scholarship offers to his name.  Now he’s one of the hottest prospects in New England with seemingly new schools calling every week trying to get involved with the big guard who puts huge points on the board for Putnam Science Academy.  Jordan’s little brother has finally made a name for himself with A-10 offers on the table to prove it.

Kachi Nzerem, New Mission – With a potential post-grad year a strong possibility, Nzerem could be next year’s version of Williams, that is unless someone scoops him up before hand.  He had a long list of college coaches intrigued last summer thanks to his size, highlight reel athleticism, and shot making ability.  With another year to harness his skills and further enhance his feel for the game, his stock should certainly be on the rise.

Omari Grier, Maine Central Institute – MCI’s sniper is as dangerous of a catch-and-shooter player as there currently is on the board.  While his game can lack versatility at times, the fact that he knows his role and plays it without hesitation is one of his biggest strengths.  With guys who can stretch the defense being harder and harder to find, players like Grier find themselves in consequent high demand.

Zarko Valjarevic, Notre Dame Prep – His was a popular name in the fall when he was a frequent standout at Notre Dame’s open gyms.  He hasn’t had quite the impact we expected this season but that has a lot more to do with Prep’s depth in the backcourt than it does any deficiency in his game.  A big Euro guard with a feathery stroke off both the catch and the dribble, Valjarevic’s special talent is one that many schools could benefit from.

Of the Forward Variety

Neal Beshears, Maine Central Institute – A skilled forward with a beautiful shooting stroke, Beshears is the prototypical Indiana product.  Capable of playing both forward positions but probably best suited as a face-up four-man, he finds himself in high demand as there are a plethora of program looking to fill a void at that spot.

Ryan Romich, Vermont Academy – The post-graduate year has done the Groton-Dunstable alum well as he continues to extend his skill set, but his best asset continues to be his competitive nature in our books as his energy, athleticism, and diligent approach to the game are things that simply can’t be taught.

Samir McDaniel, New Mission – A fierce forward who is a man among boys in the MIAA, McDaniel excels at getting to, and scoring around, the rim.  Whether with his dribble or simply by going to the post, McDaniel overpowers his defender and is one of the best three-point play prospects you will find inside the paint.

David Madol, Manchester Memorial – Always an intriguing prospect thanks to his size, athleticism, and skill set, Madol’s development has taken the next step as of late as his frame continues to fill out and he learns to assert himself.  His best basketball is undoubtedly still in front of him as he realizes how to put his plethora of tools to work.

Travis Souza, New Hampton – If you value skilled players who know how to play then you will love this guy.  Ideally suited for structure at the next level, Souza shoots a good ball from long range, moves without the ball beautifully, can really pass it, and will surprise you when he rises up for an unexpected dunk in transition.

Jerel Scott, Worcester Academy – He may have more physical tools than anyone on this list with a frame that looks like it was made for the league.  Talent has never been the question and having become more consistent during his year at Worcester, a coach who can continue to bring Scott along at the next level is likely to reap the rewards.

Gerald McClease, Wilbur Cross –McClease has a strong body and goes to the rim running down hill daring oncoming defenders to step into his path.  Especially dangerous in the open floor and also a weapon on the offensive glass, McClease is one of the CIAC’s top seniors this year.