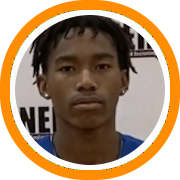 The program has been a staple of the region’s prep landscape for the last 15 years now, attracting D1 caliber talent from all over the world and providing them with a platform and a stage to prove themselves.

This year’s team is again loaded with college caliber talent under head coach Dan Haynes, with players for all three levels, including two that have already earned scholarships – Kazell Stewart and Miles Monchecourt.

The most notable names on the team come from Connecticut, a pipeline that has been solidified since Doc Kennedy’s arrival on the coaching staff.

Akili Evans, who graduated from Holy Cross High School in Waterbury last year, arrived with an already decorated resume but no scholarship offers. He’s been proving himself to be clearly of that level though and taking both his body and his game to new levels. He’s taller, stronger, and more equipped to play with the ball than he was a year ago…and putting up numbers against top competition.

Tyler Dubose is following a similar trajectory. The big man has always been known for his soft touch and ability to operate with his back to the basket, but he’s now gotten himself into the best shape of his career and beginning to add a face-up game to match his post-presence.

Also from Connecticut, is Tahmeen Dupree, a hard-nosed and tough point guard who attacks with a purpose and finishes hard at the rim but prides himself on setting the tone on the defensive end.

There’s a pair of big perimeter players from New York who are equally intriguing long-term. Ricky Rollins is a big wing from Schenectady who is loaded with upside. In addition to his size, he is long, athletic, and smooth with good passing ability and an effortless stroke from behind the arc.

Quion Burns comes from White Plains and is more of a big guard, and a true volume scorer. He went for 48 points in a recent game against Putnam Science Academy, showing his ability to score in bunches. He is capable of getting hot with his jumper but also shifty off the bounce.

The man in the middle is Jerry Ngopot, a 6-foot-10 native of Senegal, who is one of the most physically imposing big men in the region. He’s long and strong, athletic for his size, and able to assert himself on both ends of the floor. He’s a defensive deterrent but also a legit low-post scoring threat.

Ngotpot is just the tip of the iceberg when it comes to Lee’s international connections, which has always been a point of emphasis within the program.

Vlado Ostasevic is a stretch-four from Montenegro who has footwork inside, can rebound, pass, and attack from the perimeter. He is also an excellent student in the classroom.

Luke Novakovic, from Serbia, has similar size and strength along with a smooth shooting stroke from the outside and crafty floor game with the ball.

Gerlouis Tokody is a strong and athletic big guard from Germany who attacks hard, finishes through contact, and can play above the rim.

Dom Ramonas, a point guard from Lithuania, is physically strong, able to distinguish himself on the defensive end of the floor, but also knock down open shots. Eb Chan and Alan Zibi, from Australia and France respectively, add two more guards to a deep backcourt rotation.

One player who didn’t have to travel very far to be a Panda is Mike Connolly, who comes from nearly Westbrook, Maine. The versatile lefty forward has inside out tools with his skill and physical tools, but has been proving his worth against unprecedented competition since arrival. Jonathan Donovan, a quick playmaking guard, is another local product.

Isaiah Knight and Cameryn Miller are two New York products who have proven to be steady contributors. Knight is a tough and athletic lead guard who can attack the rim, has a good pull-up game, and is at his best in transition. Miller is a bouncy hybrid-forward who is productive around the rim but can also step-out and knockdown a mid-range jumper.

One of the most pleasant surprises the day we were in the gym was Ahmad Jaded, a big wing from Stoughton, Massachusetts. He had the size and body type to translate to the next level and was also a quality shooter, zip passer, and dunking with both hands.

Overall, this is a group that has two players already off the board, but a plethora of still available talent that should attract interest from all three levels of college basketball as Dan Haynes and Doc Kennedy continue to provide platforms and opportunities for players from the northeast region, and literally across the world, to prove themselves.