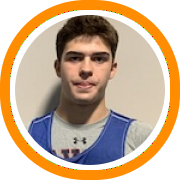 The CIAC is back, albeit for a shortened season that will not include a state tournament.

Thus it was only fitting that the Be Seen Tour return with a trip to a program that has annually been one of the state’s best in recent years – Notre Dame High School of West Haven.

Jason Shea’s club has won three SCC regular season championships in the last four years, hasn’t lost a home game in that time, and is coming off a 21-2 campaign last season that ended prematurely when the state tournament was cancelled.

8 of their top 10 rotation players are gone from that team, but expectations are no less ambitious coming into this unprecedented 2021 season.

They return one of the best senior forwards in the state, Ben Carroll. The 6-foot-7 southpaw is known for his skill-set and shooting range, but he’s returned having totally changed his body and added to his versatility. He’s cut-up physically, playing with more force and athleticism, and showing his full offensive repertoire by scoring with his back to the basket, getting out in transition, and making more assertive attacks at the rim.

His running mate inside, Tre Rawlins, is ready to take a major step forward this year as a senior. A wide-bodied 6-foot-4 forward, Rawlins is the consummate mismatch problem because he can create space and thrive inside the paint, is a high-volume rebounder, but can also face-up and be a playmaker against opposing interior defenders because of his ability to handle, pass, and shoot.

Robbie Oliverio and Tevis Blount are two more seniors that could contribute. Oliverio is physically strong with the ability to bang inside but also knock down open shots from the perimeter. Blount was a pleasant surprise the day we watched as he too showed a quality stroke while also making clever drives to the rim and showing some leadership tools. Jon Bushka is another senior guard that will help to provide leadership.

The junior class features Matt Dobie, a strong-bodied 6-foot-3 wing who plays a hard-nosed, physically aggressive, brand of basketball, and Amare Davis, one of the team’s better shooters who also possesses good quickness and the ability to defend bigger guards.

The most talented long-term prospects in the program though, may actually be the underclassmen, and the program is relying on them to grow up in a hurry and be able to make immediate contributions this year.

The most impactful of the bunch on the day we were in the gym was sophomore wing Timaury Gay. With broad shoulders, long arms, and an already powerful frame, his physical tools stand out at first glimpse. But his game seemed equally advanced. He handled with his head up and made plays in the open floor, knocked down multiple threes, and had a soft touch on his pull-up too.

Mekhi Conner, Ayo Aminu, and Jaydon Jackson added to a very deep sophomore class.  Conner broke his leg last year as a freshman but should be ready for a breakout sophomore campaign. He’s a strong-bodied guard who is equally smooth and also able to knock down open threes. Aminu is a talented, 6-foot-5, southpaw forward with clear potential and a bright long-term future. Jackson has long-term potential as well with good early size and a frame that looks poised to keep filling out. Matt Piechota is a gritty two-sport start who doubles as the quarterback on the football field.

Tajae Jones is the only freshman on the roster. He’s young and still pretty raw, but probably the most naturally talented prospect in the program. At 6-foot-6, he’s a budding big wing who has reportedly grown four inches in the last year. He has the long arms, good frame, and requisite physical tools to match along with a soft natural touch and shooting potential to keep developing. In short, he’s just beginning to scratch the surface of putting all the pieces together, but his upside down the road is substantial.

Ultimately, the Notre Dame West Haven tradition is a strong one. It dates back to former head coach Gary Palladino and stars like Greg Mangano and Tremont Waters. There’s no denying though, that the program is adding new chapters to that legacy under head coach Jason Shea, not just with their success in terms of wins and losses but alums like Tahj Eady (USC), Jalanni White (Canisius), Connor Raines (UT Rio Grande) and Zach Laput (Bentley) all finding success at the next level.

Now, this next chapter will be led by Carroll and Rawlins, while a deep and talented young core is simultaneously ready to make their presence felt right away and carry the program to continued hew heights in the years to come.