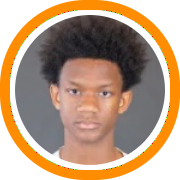 The New York City based Riverside Hawks were once one of the nation’s most dominant AAU programs with Lamar Odom, Elton Brand, and Ron Artest all teaming up together back in the 90’s.

While they’ve faced plenty of adversity since, and fallen off a result, they’re in rebuilding mode under the direction of Tony Hargraves and Daniel Colon, and poised to surprise a lot of people based on what we saw at a recent stop on the Be Seen Tour.

With all of their high school teams in attendance, the depth of talent blew away any of our expectations and made it clear beyond a shadow of a doubt, the Riverside Hawks aren’t going away, they’re actually preparing to make a comeback.

This was a team that was going to have a dynamic tandem in both the backcourt and frontcourt.

The backcourt was going to be led by Julien Soumauro and Zakai Zeigler. Soumaoro is a veteran of the program who landed a D1 offer in the spring of 2019 following a big weekend on the Adidas Gauntlet. He went on to put together a strong senior campaign at Cardinal Hayes and is now headed to Woodstock Academy for a prep year, where he hopes to solidify those division I aspirations. While Soumaoro is a microwave type scorer, Zeigler was the guy who made the team run when we watched. He’s skilled and capable of getting his own, but he also was a true point guard who understood how to run a team and just had an instinctive feel for how to play.

The frontcourt duo was Troy Hupstead and Promise Opurum. Like Soumaoro, Hupstead is another New York native headed to New England for a post-grad campaign as the Mount Vernon alum will play at Springfield Commonwealth next year. He has similar hopes of playing his way to the D1 level and has the powerful build, long arms, and high-motor to do it. Opurum already owns a steady diet of D1 suitors after making huge strides within the last year. He actually came off the bench last season for New Rochelle, but is an explosive athlete around the rim who keeps taking his game and body to new levels.

Xavier Riullano is another Mount Vernon product poised for a big senior season. Riullano is a big guard with a strong body who can play on and off the ball. Construction’s Shemar Chester is a skilled and shifty southpaw who provides yet another playmaker in the backcourt.

Former MacDuffie School forward Omari Webb, who is headed to Covenant Prep (NJ) for a post-grad year, was the swiss-army knife of the group. Probably the only true forward on the roster, he’s long, wiry, able to play multiple positions, and starting to extend his perimeter skills and prove his face-up game.

This is where things start to get special for the Riverside program. Jayshayne Woodard is a rising senior at Wings Academy, but listed in 2022 because he’s already solidifying plans for a prep year, which will give him the extra time to grow into his long, but still undeveloped, frame. He and Noah Best both landed their first high-major offers from Illinois last week. Best was already the most recruited prospect in the program as he holds a variety of D1 offers just halfway through his high school career. A big wing from Mount St. Michael’s with a nice combination of physical tools, basketball skill, and poise, both he and Woodard should only continue to emerge in the next two years.

Iona Prep’s Orlando Wallace and Monsignor Scanlan’s Rich Smith are two more rising juniors who landed their first D1 offers this summer. Wallace is a 6-foot-9 big man who is an absolute force inside and one of several prospects in the program who is originally from Jamaica. Smith is a long and athletic guard with good size and all types of clear potential that should keep emerging in the coming years.

Quincy Platt and Ikenna Ude-Smith are two more prospects in the class of 2022 that have high ceilings. Platt will be joining Best at Mount St. Michael’s next year and while he’s a prospect that has yet to make much of a name for himself, the big lefty has too much size, length, and fluidity for that to remain the same. Ude-Smith was arguably the most explosive athlete in the building. He plays the game on a pogo-stick and gets his head up on the rim with ease. He’ll be transferring into Springfield Commonwealth from Hudson Catholic (NJ) and should start to emerge in the coming year.

The Cardinal Hayes backcourt tandem of Darell Victory and Mamadou Traore would have added even more perimeter firepower to this group while Fieldstone’s Kameren Rodriguez and Manhattan Center’s Odnais Done add to their terrific backcourt depth.

You could make the argument that the Riverside teams just kept getting better as they got younger. The 2023 squad certainly appeared to be the deepest class in the program.

It began with Javoy Thompson, a big wing from Mount St. Michael who is still a little under-the-radar nationally but has the potential to play at the highest levels of college basketball one day.

St. Raymond’s Jireej Cole is an absolute man-child inside as the sophomore forward has power and explosiveness well beyond his years.

Incoming Springfield Commonwealth big man Emile Johnson is loaded with long-term upside as the 6-foot-9 big man just arrived from Jamaica and is admittedly still very raw, but with the length, frame, and size to emerge in the coming years.

There’s a handful of other incoming New England prep products in the class. Will Franks was already at NMH but is reportedly one of the program’s best long-term prospects with big guard type skills. Will Groot and Brandon McCreesh are both exciting long-term prospects headed to Hotchkiss next year. Groot is a big-bodied southpaw post with a soft touch and good skill-set while McCreesh is a big guard who earned PSAA All-Division 1st Team honors this past season at Knox. Caleb Crawford is a scoring guard headed to Loomis Chaffee who should have a very bright future for the Pelicans and beyond.

Iona Prep has a very talented sophomore tandem in place with Lawrence Mitchell and Bangaly Berete. Mitchell is one of the most impactful players on the Riverside 2023 roster right now as the physical guard attacks relentlessly and can take off in space. Berete is in the early stages of his development but is a potential big win in the making with clear upside.

Molloy’s Emmanuel Obiora is a similar high-upside prospect o keep an eye on as the 6-foot-6 forward has a lot of early markers as well.

Dwight High School’s Nick Padilla is the guy who helps to run the show for this very talented squad.

A select few rising freshmen were in the gym, and they quickly showed they belonged. Incoming Springfield Commonwealth forward Maurice Vassell had just arrived from Jamaica but had the type of natural talent and upside that immediately jumped out. Oke Okrokoto is headed to Christ the King next year and already drawing comparisons to Kofi Cockburn because of his unmatched physicality and power in the class. Collegiate’s Jack Baily is a multi-dimensional prospect with a good combination of early size and fundamentals.

Stay tuned to NERR tomorrow as our coverage of the Riverside Hawks program will continue with all of the video content to come from the Be Seen Tour.