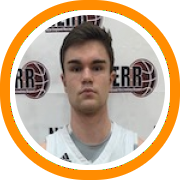 There are lots of sneaker sponsored grassroots programs that have multiple teams, but let’s be clear about something, the New York Lightning Select program is no one’s “B team.”

In fact, when we watched them workout last week, we found ourselves asking the same question repeatedly, “isn’t that guy good enough to play for the EYBL team?”

The first and most obvious example was Peter Carey, who might just be the best kept secret in New England. It won’t stay that way for long though as Carey’s natural tools are the type that jump out at you from the first moment you walk into the gym. We’ll talk more about him tomorrow though when we break down the NYL Select’s 2022 class.

In the class of 2021, there’s a pair of incoming New England prep products who are already garnering D1 recruitment and should be among the top players in Class A of the NEPSAC next season.

Brendan Mykalcio, who is headed to Loomis Chaffee this year after graduating from Don Bosco in New Jersey last year, was the best player in the gym on the night we watched. He’s a big wing who makes shots with deep range and plays above the rim with ease.

Incoming @LC_BoysBBALL post-grad Brendan Mykalcio (@mykalcio) was the most productive player in the gym last week when we watched @NYLselect. Check out his highlights ⬇️pic.twitter.com/czWLdKPDSP

Aidan Horan, who is headed to Avon Old Farms next year, is a similar big wing who can make shots from long-range, but especially powerful with a college ready body. He already owns a D1 offer from Air Force.

Other familiar names include a handful of returning prep products in Loomis Chaffee’s Pierce Prendergast, Kent’s Jake Daly, KUA’s Quinn Guth, and NMH’s Reece Clark, as well as Brett Hutchison, who is headed to Canterbury for a post-grad year after graduating from Notre Dame-West Haven.

Prendergast is a prospect who continues to see recruitment from a variety of levels of college basketball. He was one of Long Island’s biggest scorers before arriving in New England, where he has diversified his game, especially on the defensive end of the floor.

Daly remains a unique player, and consequently intriguing prospect, because he’s a legitimate point guard at 6-foot-5 who can really see the floor and distribute the basketball like few others.

Guth ran the point for a KUA squad that went 20-8 in class AA of the NEPSAC and averaged double-figures while shooting 40% from the three-point line while doing it. He’s as hard-working and reliable as they come.

The hardest working guy in the gym though just might have been Clark, and that’s apparently representative of the way he’s spent the last several months, as the NMH wing has both built up his body and reportedly made 800 shots per day.

Hutchison is cut from a similar cloth as he’s one of the grittiest guards around and he’s done nothing but win throughout his high school career, first at NMH and then at Notre Dame. You can bet it will be more of the same next year at Canterbury.

Sam Pohlman is a player who has been making a name for himself this summer. A point guard from Beacon High School in New York, Pohlman took MVP honors at the recent Hoop Group Academic Elite Camp and was very impressive the night we were in the gym. He runs the show with a high I.Q. and also has a bit of an edge to his game that helps to further differentiate him.

Ansley Almonor is another key player. The wide-bodied 6-foot-7 forward graduated from St. Joseph’s Regional High School in New Jersey last year and is headed to Our Saviour Lutheran in the Bronx for his post-graduate year. He’s got the body to do damage inside but so face-up tools to make him a mismatch problem as well.

Overall, the New York Lightning Select’s roster runs 11 deep, and every single one of them is both a strong student and definite college player. More than that, between the collective group, there are very literally prospects for all levels of college basketball.

Stay tuned to NERR tomorrow as we’ll break down their 2022 class of Carey and Tommy Mooney and also examine their second Select program, another team full of college prospects.