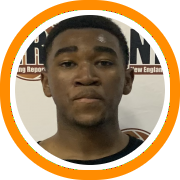 Earlier this week, we profiled the 2021 class for a New Haven Heat program that has continued to ascend in recent years.

Today, it’s time to shift our focus to the classes of 2022 and beyond to break down the top underclassmen we saw when the Be Seen Tour came to town.

It all starts with Isaiah Earl, a 6-foot-8 big man who has come up the ranks in the Heat program. Earl is still just scratching the surface of his potential but he’s made notable strides within the last year – getting bigger, stronger, and just starting to develop his skill-set. His recruitment has grown as well with current offers from the likes of LSU, Nebraska, DePaul, TCU, New Mexico State, Quinnipiac, Siena, UMass, and Bryant.

The Be Seen Tour also gave us our first look at Middletown’s rising junior forward Elijah Wilborn, a player who just landed his first D1 offer from Siena. Wilborn is lanky with good size, clear physical upside, and a lot of early, raw talent.

St. Luke’s Justin Covington was impressive. This 6-foot-5 jack-of-all-trades dictates his pace like perhaps no one else in the gym and has a “slow-mo” type of feel that is reminiscent of a young Kyle Anderson.

Incoming Suffield Academy guard Henry White is another part of the core group in 2022. The lefty is smooth, shoots it well, and is known for his big heart, hard-working mentality, and leading by example.

Matthew Gibbs should be a catalyst at Hillhouse next year. He’s physically strong and an aggressive two-way player who can slash to the rim and also defend.

Ali Aklin is technically a rising senior at Hamden but he’s young for his grade and reportedly exploring a prep year following his gradually. He plays 94 feet and is a crafty driver.

St. Joseph’s Jason James showed some flashes with strong takes to the rim and has talent that is clear when his motor is running at full throttle.

Matteo Cristanti will join Hamden Hall’s sophomore class after spending last year at St. Thomas More. He’s a forward with a good combination of size and skill who can stretch the floor.

Bridgeport Prep’s Jakari Tertulien is a powerful young player who proved his ability to get down hill and also showed a complimenting IQ and ability to pass the basketball.

Cheshire Academy’s Isaiah Riley is a match-up problem waiting to happen. He’s big, physical, and brings his mentality straight from the football field but also has a high IQ

Jair Mathis is the son of the late T.J. Mathis and, like his dad, is a talented guard. He’s skilled with a high-arcing stroke and tons of savvy and natural instincts for the game.

Josh Pearson will be Mathis’ running mate at Hamden High School and he’s a bigger perimeter player in the making who can physically overwhelm his peers at this point.