Be Seen - New England Storm u16 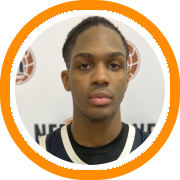 The New England Storm made it clear, they wanted all three of their top high school teams to be part of the Be Seen Tour.

They understood that most of their counterparts were focused on their varsity teams, and rightfully so given the amount of exposure opportunities they had missed this season. They too were going to give their u17 program the platform, but they wanted to make sure their younger teams had the same opportunity.

When we arrived in Derry, New Hampshire to see them it became abundantly clear why. The evening started with the program’s two younger teams and to say they weren’t your traditional Storm teams would be an understatement.

The program’s leadership team have been hard at work, rebuilding their talent base from the ground up. It begun years ago in the middle school ranks, where they’ve already proven themselves, and it’s now growing to the high school divisions.

The u16 team is led by Central Catholic point guard Xavier McKenzie. He’s known for his scoring prowess and rightfully so as his improved three-point range makes him capable of getting his own shot at all three levels but we were perhaps even more impressed by his IQ and unselfishness. He ran the show, had complete control of his handle, got others involved, and made a couple of high-level assists, with both hands, off the dribble.

Central Catholic (MA) & @NEStormBball PG Xavier Mckenzie (@x_upnext22) is a name to know in the class of 2022.

Jayden Ndjigue may have the highest long-term ceiling on the team. He’ll be reclassifying at Rivers this fall, and joining the class of 2023, after already being among the Elite 75 Frosh/Soph last year. He’s long with a good frame and already productive on both ends of the floor. He’s advanced defensively for his age and also a crafty offensive player with developing weapons.

Another 2023 prospect we saw recently on the #BeSeen Tour...@NEStormBball & Rivers (@CoachZalaski31) '23 Jayden Ndjigue is a two-way player with a big-time motor! pic.twitter.com/zdtA2tIx40

Matt Lamy, from Bow High School in New Hampshire, missed the workout we attended but was already a young prospect we were familiar with. He’s another guy who understands the importance of both ends of the floor at an early age, as he’s been a defensive stopper for the Storm this summer, and has plenty of offensive tools and upside with good size and versatility.

That’s just the tip of the iceberg though in a very deep backcourt.

Kyle Monahan is an ultra-crafty southpaw point guard with some definite flair to his game. He’s heady and smooth, but also owns a pretty quick first-step, and is one of the team’s better playmakers.

Andover’s Richie Shahtanian stood out with his strength, skill, and intellect. The strong-bodied guard shot the ball well from the three-point line but was also a very good passer and willing ball-mover.

Hamilton-Wenham’s Markus Nordin hasn’t gotten his name out there much yet but he handled the ball with his head up, played very hard, and scored in different ways.

Harrison Lien is another under-the-radar prospect, but certainly one to keep an eye on, as the lefty knocked down tough threes and had a lot of upside left to discover physically.

Up front, the team has a trio of newcomers led by Nashua South’s Rhett Medling. A legit 6-foot-7 post who is still just developing but has good passing ability for his size. Alvirrne’s Brendan Graham provides a rugged interior presence as the 6-foot-6 big man can throw his body around inside.

Meanwhile, Sam Andreottola is another strong-bodied forward at 6-foot-5, but also one who can stretch the floor with his shooting range.

Overall, it’s a deep and talented team that has had a very successful summer even in the shortened season, not just playing up but often beating quality 17u programs from around the region and providing a sign of things to come next spring and summer.