Be a Baller not a Bully - Session 2 Recap 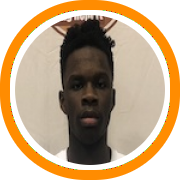 NERR'z Zack Sandberg returned for the second week of the "Be a Baller, not a Bully" camp in Waterbury this week.

This is the second year of the co-ed camp which was founded and is run by Ta'Quan "Tootie" Zimmerman, a local product who still plays professionally in various international leagues.

The morning session is filled with skills and drills while the afternoon consists of "run and shoot games" but the anti-bullying theme is a constant over the course of the week with various speakers scheduled to attend.

Here's a look at who has impressed this week:

Caleb Sampson, Sacred Heart 2021: An athletic playmaker on both ends of the floor, the rising junior is both a scrappy defender and able to consistently get to the rim on the offensive end of the floor.

Akili Evans, Holy Cross 2020: Evans continues to emerge and diversify game as he bullied his way around the court and got any shot he wanted.

Jonathan Edwards, Waterbury Career 2020: Edwards is a high I.Q. player who just knows how to play. He's great with the ball in his hands, always has his head up, and passes weel.

Sincere Dozier, Kennedy 2022: One of the younger players in the top division, Dozier more than held his own as he showed he is an aggressive scoring guard with an advanced skill set.

Ashton Sannasi, Holy Cross 2022: Sannasi is a knock-down shooter with a great looking stroke who also sees the floor well. The hard-working guard is also a willing defender and on his way to Holy Cross for the upcoming season.

Jay Turner, Kennedy 2019: An uncommitted senior who starred at March's Academic Elite 75, Turner continues to use his length to play all 3 perimeter positions as he is long, smart, and has a great feel for the game.

Dion Perkins, Derby 2021: A name name to emerge out of the valley, Perkins is a high-level athlete and long driver who reportedly averaged over 20 points per game last year and is also a versatile defender.