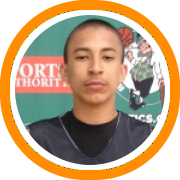 The Bay State Jaguars Elite team recently returned from Memphis, Tennessee, where they took 7th place in the AAU U13 Division I National Championships.

Point guard Patrick Benzan, an alum of the Hoop Mountain Junior Elite Camp, thrived all week for the Jaguars as he helped to lead them to wins over the San Francisco Rebels, Perkasie Knights (Pennsylvania), North Kentucky Tar Heels, All Ohio Red, The Future Players (Maryland), Cincinnati Lakers, and Kentucky Elite.

The 7th place finish was the highest for a Massachusetts team competing in a division I national championship so far this year.

But it was far from a one man show as the Jaguars Elite team features a number of other talented players including several other Junior Elite alums in Jarred Reuter, Michael Lambert, Kyle Rodrigues, Nick Simonetti, and A.J. Maestas.

It was Benzan, however, who ran the team and did a beautiful job doing so.  He handled the non-stop full court pressure that the Jaguars faced all week long, got the team into their offense smoothly, and showed an ability to create for both himself and others with his dribble penetration.

Benzan averaged 7 assists per game for the week but also showed the ability to put the ball in the basket when necessary, including a 20 point performance against the SF Rebels (to go along with 9 assists).

Benzan also came up big on championship Sunday in a thrilling win over Kentucky Elite.  The Jaguars used a 16-0 second half run to take that decision and Benzan was responsible for 14 of those points, scoring 10 himself and assisting on two other buckets.

Ultimately, the Jaguars are a deep and talented team with weapons all over the floor, but as they learned at nationals…no team is better than their point guard.  And with Patrick Benzan running the show, the Jaguars proved to be one of the top teams in the country.