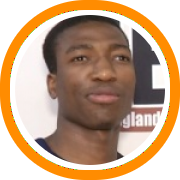 Mike Woodbury’s MB Nation squad stole all the headlines on Saturday with their impressive 57-52 win over Albany City Rocks at the National Invitational in Springfield.

Led by guards Matt Barr and Dustin Cole, as well as forward Isaiah Bess, all eyes were on the Nation on Saturday afternoon as they upset one of the most high-profile AAU programs in the northeast region.

Barr knocked down several three pointers, facilitated the offense when need be, he scored inside, rebounded, and played spectacular defense on City Rocks guard Shadell Millinghaus. Cole was more of the same, the true point guard from Bonney Eagle had several beautiful finishes inside, he hit some deep jumpers, and he set up his teammates on several occasions for open looks.

The tallest player on MB Nation’s roster is 6’5, and Bess being 6’4, he obviously understood his role going into the game against a much bigger team. Bess was all over the glass and he played inspiring low post defense – a huge x-factor in the win. That energy obviously rubbed off on the rest of the team, as the boys from Maine seemed to pick up every 50/50 ball there was.

The towering frontcourt Paschal Chukwu and Sean Obi showed immense talent Saturday for CBC-Donnelly. Both showed off their long-term potential with quality footwork and finesse. Improving rapidly, look for these rising prospects to continue to flourish for the remainder of the summer.

Chris McCullough, the highest-profile player at the event, showed that he is an athletic forward who runs the floor hard every play for Team SCAN.  McCullough plays with a high motor and brings an improving jump shot and good ball handling skills for a big man.  He is a consensus high major player and has so much talent because of the versatility he brings to the floor.

Greg Bridges played the point guard position as well as any player at the whole event on Saturday. The 5’8 sophomore from New Mission is an exceptional ball handler, and he has a quick first step to go along with it. Also a deadly mid-range shooter, Bridges torched defenders using a stepback.

Sam Donahue was one of the best shooters in the gym today for RI Hawks, not only that though, he showed the ability to take care of the ball and run an offense. Colin Richey and Charles Correa split time at point guard for the Hawks, both hitting some long-range jumpers and creating for their teammates off the dribble. Colin Pascoe played a hard-nosed brand of basketball all over the floor – he was constantly on the offensive glass and did his part in altering shots when he was on defense. Pete Weston knocked down a variety of shots, moving well without the ball and giving Richey and Correa the opportunity to create.

Bay State Flash’s Johnny McCarthy and Carlin Haymon both played great in the Flash’s wins today. McCarthy shot the lights out for the Flash from deep, while Haymon played organized facilitator and assist-maker in transition. CJ Burke and Matt Mobley also did a great job of hitting shots, moving without the ball, and setting up good looks for teammates.

Chris Braley and Pete Miller both stood out for Middlesex Magic. Miller is a skilled big man who scored creatively around the rim. Miller has the ability to extend the defense with his jump shot and also showed off a high court IQ. Braley was his same old self today – showing off the toughness off the dribble, the precision in his shooting, and the defense that makes him a legitimate division 1 college prospect.

Westchester Hawks have a great inside-out duo consisting of floor general point guard Danny Upchurch and big, strong forward Samuel Dingba. A quick point guard who runs his team with poise, Upchurch hit numerous threes and played a very good defense, while limiting his turnovers. Dingba is a powerful forward who throws down thunderous dunks and swats shots left and right. Already a well-known player, as his offensive game grows, Dingba will be a player on the radar of many more high major programs.

MABC’s Catholic Memorial backcourt of Aamahne Santos and Chris Siggers was the deciding factor in a close win over New York’s Positive Direction. Santos and Siggers are very similar players – each standing at about 5’10, they defend both guard spots and live for getting to the paint off the dribble and creating for teammates.

Winston Morgan of Unique All-Stars has been getting division 1 interest and showed today that it is well deserved. He controlled the tempo, scored when he needed to but acted as a facilitator for most of the game. Morgan’s true strength is his defense as he “puts the clamps” on any opposing player he faces.

Taylor Fortin from CT Northstars is a shifty point guard who can knock down open shots and create for his teammates. He broke out today with his impressive offensive skill set.