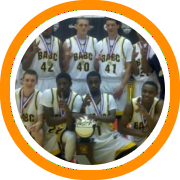 BABC’s most recent national title was earned at Disney’s Wide World of Sports on Thursday afternoon with a 61-55 overtime win over Team Charlotte in a game that was televised live on ESPN3.com.

BABC was able to control the tempo from the onset, slowing the pace and trailing 21-18 heading into halftime.  The deficit remained identical after three quarters and Charlotte continued to hold their three point lead even into the final seconds of regulation until BABC point guard Jonathan Joseph emerged as the hero of the day by drilling a three-pointer to force overtime.

BABC began their run to their most recent gold medal with three huge wins in pool play, knocking off Team Florida 60-35, South Carolina Emerald City Dream Team 90-33, and Ohio Shining Stars 70-31.  Upon reaching the championship bracket, BABC defeated Jacksonville Bulls 64-41 in the round of 32, Georgia Coastal Rebels 73-27 in the round of 16 and Adidas Orlando Venom in the quarterfinals.

Thursday began with a semifinal match-up against the Albany City Rocks in which  Bonzie Colson Jr. led the way with a dominant 23 points and 21 rebounds as BABC earned a hard fought 67-63 overtime victory to advance to the final.

Colson, Robinson, Cobb, and Joseph were all returning members of the 2011 AAU 9th grade National Champions and have been in the program since 2008.  Ahearn is another four year BABC veteran.

The BABC sophomores currently have a record of 53-1 on the season.