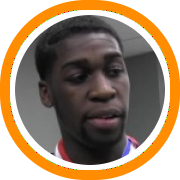 The Boston Amatuer Basketball Club’s annual Holiday Classic got underway on Friday at the Shelburne Community Center and after eight games of action over the course of the last two days, the event will conclude with two final games on Sunday at the Reggie Lewis Community Center.  Here’s a rundown of the action thus far:

New Mission held the lead around double figures for the majority of the game and gradually extended the margin in the fourth quarter.  Franklin Pierce bound swingman Asante Sandiford, who is typically known for his defensive abilities, led the way for New Mission with 23 points while Joe Marandola scored 14 for Bishop Guertin.

Cambridge scored a convincing win over a Springfield Central team that came into the game ranked 15th in the state according to ESPN Boston.  Fredens Deneus had 13 points and 12 rebounds for Cambridge while holding Chris Baldwin to just 8 points for Central.  Baldwin did assert himself defensively with 6 blocked shots while Diandre Shoulder-Williams and Tevin Charles finished with 14 and 13 respectively for the victors.

The visitors from Connecticut held a slim lead throughout most of the game and ultimately held on for the victory.  Chaunce Dunbar led a balanced attacked for the Warriors with 14 points while Tynique Woods-Culver finished with 12 and Tyler Rowe and Aaron McHenry each had 10.  Raekwon Cole and Dion Knight scored 15 a piece for East Boston.

Hendricken outscored Dorchester 39-23 in the second half while only allowing 10 points in the fourth quarter in order to earn a come-from-behind victory.  Chris O’Brien led the way for Hendricken with 14 points and four three-pointers while Markus Neale had a team high 16, including a pair of threes, in a losing effort for Dorchester.

Everett established a big first half lead but Brighton did their best to make it interesting down the stretch.  Ultimately, Everett wouldn’t be denied.  Gary Clark scored 21 points while grabbing 12 rebounds to anchor Everett’s interior while Ernie Chatman had 17 points to pace the backcourt.  Lubern Figaro also finished with 17 points

Coming off a big win a day earlier, Cambridge came intent to dethrone the MIAA’s top ranked team, but Putnam finally got their big three back with David Murrell returning to the line-up.  Murrell scored 18 of his team high 22 points in the second half while chipping in with 9 rebounds and Tyonne Malone added 18 and 6.  Dizel Wright left the game early in the second half with a dislocated shoulder but managed to return and finish with 14.  Cambridge was again led by Fredens Deneus who finished with 12 points and 13 rebounds while Isaiah McLeod scored 14.

North Quincy’s six-foot-nine senior center Anthony Green was the story as he not only scored 19 points, but more importantly, by patrolling the paint for 5 blocks and spearheading a dominant defensive effort to hold East Boston to only 38 points.  Dion Knight was an offensive bright spot for East Boston with 14 points.

The final game of the day hosted two of the most storied programs from Connecticut and Rhode Island respectively.  Ultimately, the Nutmeg State prevailed over the Ocean State with Tyler Rowe leading Windsor with 18 points while Chaunce Dunbar chipped in with 10.  Chris O’Brien had 13 for Hendricken.

*Games will be played at the Reggie Lewis Center, 1350 Tremont St, Roxbury, MA