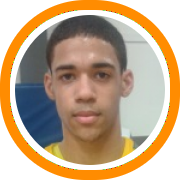 The BABC Veteran’s Day Classic is annually the fall finale for a number of New England’s top AAU teams.  This year’s event was no different with a several talented programs converging on the Mansfield Sports Plex.

The host club dominated day one of action with the 11th grade team cruising to a pair of victories in preparation for next spring’s EYBL schedule.

Terance Mann continues to pace the club with his steady contributions on both ends of the floor while Bruce Brown appears poised to emerge as one of their top weapons.  The Vermont Academy sophomore put on a show on Saturday night with tough drives, smooth jumpers, and tip dunks alike.

Tilton junior Franklin Porter also looks to be an important addition for this club.  A well built and highly versatile offensive player, he’s a walking mismatch problem who is equally comfortable punishing opposing defenders on the block or operating beyond the arc.

Tyree Robinson continues to be a rock for this club, utilizing his incredible athleticism to be a sparkplug on the offensive end as well as a rim protector defensively.  Cam Durley also provided some solid minutes on the interior while Tommy Mobley looks poised to assume the perimeter sniper role that Tyler Nelson filled so successfully last season.  Celio Araujo is the general that steadies the ship from the point guard position.

Terrell Brown did double duty on Saturday, first putting up big numbers with the 11th grade team and then establishing himself as truly dominant on the 10th grade team, while playing his third consecutive game.

The rest of the 10th grade team is comprised of under-the-radar players, who shined in their first full tournament together.  Javaughn Edmonds and Keyshaad Dixon are two second generation BABC products, following in the footsteps of their father’s who previously starred with the club, while the addition of University (CT) guard Brandon Hurst provides another playmaker in the backcourt.

Garrett Stevenson is a brand new name to the scene, but one that will be known soon enough as he fills a role very similar to the one previously held by Georges Niang and Bonzie Colson.  Jack Loughnane stands out with terrific court sense and passing ability to compliment his well developed skill set, while Justin Leip provides another highly intelligent presence in the backcourt to help run the show.

The New England Playaz 10th grade squad was also in action on Saturday, playing up at in the 11th grade division.  Tomas Murphy stands out as both the foundation and the future of this up and coming team, but the big story this weekend was the arrival of his running mate up front.  Jordy Tshimanga is a six-foot-ten center who will debut at the MacDuffie School this season, where he is bound to quickly assert himself as one of the best young big men in New England.

Another notable newcomer was Catholic Memorial sophomore Kellan Grady who has both immediate productivity and long-term upside alike.  He’ll compliment the team’s perimeter headliner, Tyree Weston, as well as southpaw sharp-shooter Ben Judson.  Nate Duda provided some impressive minutes on the wing on Saturday night while Mike Nelson provided a heady compliment on the perimeter who could make decisions with the ball and knock down open shots.

Commonwealth Academy was also in action with teams in both the 8th and 9th grade divisions.  The freshmen were unmatched in their two contests showing an assortment of future stars like playmaking point guard Jordan Vidal and explosively powerful forward Hassahn French.  Shyheim Hicks was attacking at will and virtually impossible to stop in the open floor while Jordan Hardwick showed some major flashes of upside with his length and athleticism.  Keon Queen is another physically imposing presence on the inside while a deep and talented roster of other youngsters also appear poised to make major noise over the next three plus years.

Lone Wolf Athletics came south from Vermont and played well in both of their games on Saturday. Point guard Brendan OShea and up-and-coming sophomore Kendrick Gray typically claim the headlines with this group, but Tristan Ross and Jason Manwaring are two others who deserve credit for their performance.  Ross is highly skilled with the ability to make shots off both the catch and the dribble, while Manwaring was athletic, super active, and all over the glass.

The Middlesex Magic were also in action, showing a blend of top players from last summer's team and some up-and-comers who look poised to take over next spring.  Rohan Shukla shot well from the perimeter while also driving the ball to the rim.  He rebounded it well from the perimeter while providing toughness and consistency on both ends.  Matt Kerans ran the show from the point, combining both a high level shooting stroke from behind the three-point line with the ability to facilitate for his teammates.  Only a sophomore, he's also quick and savvy with the ball, and should be a focal point for the Magic in the coming years.

Ryan Roach continued to pace the South Shore Wolfpack, showing deceptive quickness to get into the lane and make plays for both himself and others.

The BABC Veteran’s Day Classic will resume on Sunday with final pool play games leading to the championship rounds later in the day.