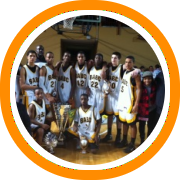 Since the Boston Amateur Basketball Club was first established in 1977 by founder and head coach Leo Papile, the organization has been one of the most decorated AAU programs in the entire country.  Despite that long history of success the last two years have brought unprecedented prosperity for the BABC with three AAU National Championships and one Nike EYBL title.

With no mountain left unclimbed on the national level, BABC returned to Milan, Italy this week for the Victor RHO International Basketball Tournament, literally the only tournament in which BABC has competed in, but not won, in their history after semifinal runs in 2005 and 2007.

The tournament is one of the most prestigious in all of Europe, annually welcoming top professional and club teams from across the globe to participate in the highly selective field.  Only one American based team is selected to participate each year, and only once in the tournament’s thirty year history has that American team advanced to the final and captured the gold medal (1990).

BABC opened the tournament field nearly a week ago with a runaway 110-11 victory over RHO BIT (Italy) and went on to win pool play games over teams from Israel and the Czech Republic before earning a trip to the semifinals with a win over another local Italian team, Pallacanestro Cantu.

The semifinal game saw BABC have to fight off another home crowd as they ousted Italy’s Comark Orobica Bergamo by forcing 34 turnovers and pushing a 13 point halftime lead into a 88-56 win, becoming just the second American team in the tournament’s history to advance to the finals.

The gym was reportedly packed with over two-thousand people for the final against local favorite Olimpia Milano Armani Junior.  BABC opened the game with a 19-6 first quarter run and never looked back, taking the championship in the sixteen-and-under division with a 73-38 win.

Four players scored in double figures, but true to form for BABC, they did it with defense, holding their opponents to just 38 points despite playing in a 40 minute game with a 24 second shot clock.

Following the championship game, Papile spoke about the experience of taking the gold medal, seemingly the last obstacle remaining in BABC’s prestigious 35 year history.  Click here to listen to that interview.

Also, click here to look back on the daily blogs from Daynia LaForce Mann, Terrance Mann’s mother and the head women’s basketball coach at Northeastern University, who has provided daily blogs to the New England Recruiting Report straight from Milan.