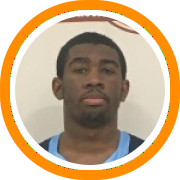 Speight is a Maryland native who came up the ranks with a big reputation and scored a number of early division I offers. He committed to High Point briefly last year before opting to make the move to New England and the class of 2018.

This year at Canterbury, he seemed to take his game to new levels with each passing month. He ended up averaging over 19 points and 4 rebounds per game for a team that advanced to the semifinals of the NEPSAC Class B tournament. He had a season high 40 points in a February win over South Kent and shot over 40% from the three-point line following the holiday break. He was named All-New England following the season.

"Mike is the type of person you want in your program," said Canterbury head coach Brian Baudinet. "He's no-maintenance, coachable, and poised in big moments. He has the ability to score in a variety of ways and he proved he has the ability to defend as well."

Speight is a skilled shot-maker with a good overall feel for the game. He's capable of playing both on and off the ball and is also a better defender than he gets credit for. Below are some of the highlights from his post-graduate season care of HUDL: