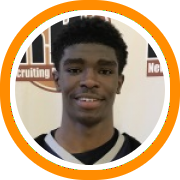 Phillips Andover Academy big man James Lewis flew under the radar all year long but ultimately his patience was rewarded with increasing division I interest throughout the season and ultimately a commitment to the University of Tennessee at Chattanooga.

Lewis is one of the first players to commit to Lamont Paris, the former Wisconsin assistant who was named Chattanooga's new head coach last month after Matt McCall left to take the job at UMass.

Lewis is originally from North Carolina and so his commitment will bring him back closer to home but also to a program that has won no less than 18 games in each of the last four seasons under two different head coaches.

In Lewis, the Mocs are landing a versatile frontcourt player capable of playing multiple positions, scoring from different areas on the floor, and bringing a rugged mentality to the glass.

Lewis is the second Andover product in the last two years to accept a full athletic scholarship at the division I level following Danny Evan's commitment to Maine a year ago. Below are some of Lewis' highlights from his post-graduate season.