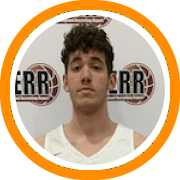 We will have updates here on New England Recruiting Report, along with live updates on Twitter and Instagram at @NERRHoops and @AllAcademicCamp

As the camp came to an end, the following student-athletes shined on Sunday morning of the AAC:

Evan Gutowski (St. Andrew's School, 2020)- A physical big man, Gutowski rebounds well and has an effective jump hook over his left shoulder.  He has 3-point range that will make him a useful pick-and-pop big for St. Andrew's this upcoming winter.

Brett Hutchinson (Notre Dame- Fairfield, 2021)- The young (but experienced) point guard is constantly in motion on both ends of the court.  He competes defensively, and has improved his offensive game to the point he can hit almost any type of shot on the court.

Liam Murphy (Wilbraham & Monson Academy, 2020)- The 6'6 forward has been a constant performer all week.  His ability to make plays for himself off the bounce has improved since the winter, and he looks much more comfortable with the ball in his hands.

Ryan Biberon (St. Andrew's School, 2020)- A throwback big man, Biberon excels on the glass and finishes around the rim while keeping the ball high.  There is no wasted motion in his post game.  He is also getting more comfortable playing on the perimeter, but he is a post player that knows what he can do effectively.

Amory Slott (Riverdale Country, 2020)- Slott drilled not one, but two shots past half court to beat the buzzer for the quarter on Sunday!  He also holds a high-arcing 3-point shot that is effective even when there is time left on the clock.

Niko Rock (Phillips Exeter, 2020)- The 6'8 forward put in a tremendous effort all weekend inside.  He fights for every rebound, and manages to get one hand (or even a finger) on most contested rebounds.  He is not afraid to the dirty work down low.

Melvin Kolenovic (Shelton HS, 2021)- The long 6'7 wing is raw but talented.  He is bouncy and finishes well around the rim.  His shot is a little long right now, but Kolenovic has the potential develop into a prospect that is one to watch down the road.

Tristian Joseph (Brunswick HS, 2021)- The quick off guard runs the floor and cruises past everyone for easy buckets.  His Euro-step was on full display for the final day of camp.  Joseph is a rising junior who took every opportunity to improve at camp, not just showcase what he can do to college coaches.

Max Egner (Maspeth HS, 2020)- Egner is a strong wing who affects the game in a multitude of ways.  He initially impressed with his driving ability, but rebounds out of his area and moves well laterally to defend multiple positions on the perimeter.