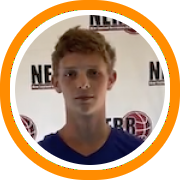 What makes the AAC unique is not just the quality of talent in the rising senior class, but the talent amongst the underclassman.  For this recap, we will highlight those performances from the Class of 2021 and younger:

Matt Mulvey (Brooks School, 2021)- One of the most improved guards around over the past calendar year, Mulvey is turning himself into a deadly outside shooter.  He has a quick release between both his lower body & upper body.

Michael OKeefe (Milton Academy, 2021)- The lefty guard is a very good athlete who finishes with contact at a variety of different angles.  His first step is very quick, and he should be able to step in and help Milton Academy compete in NEPSAC Class A next season.

Pierce Prendergast (Loomis Chaffee, 2021)- The 6'7 wing impressed with his shot-making ability, including one step-back towards the baseline in which he created so much separation from the defense that there was no chance for him to block the shot.

Chase Jackson (Bergen Catholic, 2022)- The NJ native is a pass-first point guard who is constantly talking and providing energy on the court.  He delivers the ball to the shooting pocket of a shooter every time, and leads the way a point guard should lead on the court.

Will Batchelder (Governor's Academy, 2022)- Batchelder, who will reclassify at Governor's this fall, did more than hold his own against older competition.  He slows the game down for himself, and didn't stray from his own game.  He made open shots & showed a good pace with the ball in his hands.

Carter Meshanic (Kingswood Oxford, 2021)- Carter has shot the ball very well throughout camp so far, looking more and more comfortable matching up against older players.  He does not hesitate in letting it fly if he is open.

Hunter Meshanic (Kingswood Oxford, 2021)- Hunter, just like his brother, had a great shooting day on Saturday.  He gets other players involved, which keeps the offense running at a high clip and keeps his teammates engaged because they know they will get him the ball when they are open.

Jacob Pofsky (Shalhevet HS, 2021)- Pofsky hit some big shots as the camp stretched on.  His range is above where most rising juniors are, and he is very apt at getting his defender to bite on a step in order to go backdoor.

Thomas Fontanella (Lawrence Academy, 2021)- Fontanella fights on both ends of the glass.  His midrange shot was on point today, but he kept finding other ways to affect the game other than scoring, such as rebounding & winning battles for 50/50 balls.

Graham Robinson (St. Paul's School, 2021)- The 6'10 big man continues to show signs of progression.  He is noticeably more comfortable with the ball in his hand, and is able to make plays for others off the bounce at the moment.  He takes his own offense in the flow of the team's offense, rather than look to be a "black hole" on the inside.

Jake Bender (La Salle Academy, 2021)- The 6'3 guard showed off a couple of pretty left hand floaters in which he stopped on a dime to get his shot off over a weak side shot blocker.  Bender is tough and rugged driver that attacks the hoop.

Sid Upreti (St. John's Shrewsbury, 2021)- Upreti has a quick change of speed once he reads his defender's closeout.  He goes right off hip-to-hip with a quick first step, making him difficult to guard by anyone with average lateral quickness on the perimeter.

Matt Fernandez (Needham HS, 2021)- Fernandez has been a consistent presence on his team with the energy he brings and the paint touches he can gather.  He gets the defense to collapse, and can finish over taller defenders or kick the ball out for open shots.