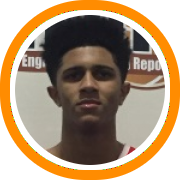 If you read our post yesterday, you know that NERR Is changing the way we rank freshmen players, as we’re publishing a list of 25 players to watch in New England’s freshmen class but ordering the list alphabetically instead of ranking them numerically. Of course, there will be other players that we discover in the coming weeks and months as the process has really only just begun for the class of 2020. With that in mind, here are the guys who have thus far stood out with their early production, long potential, or ideally, both.

John Adams, 6-5, F, Wilbraham & Monson (MA) – Coming off a big performance at the HoopHall Classic, Adams has already made notable strides in his first season at WMA. The southpaw is every bit of 6-foot-5, is likely still growing, has a high motor, and a strong foundation of skill to develop at his size.

Bol Akot, 5-11, G, Proctor Academy (NH) – Very possibly the cream of the crop thus far in the Granite State and one of the better guard prospects in New England’s 2020 class, Akot already holds an early offer from Rutgers and owns the skill set and playmaking ability to continue to make his name known to college coaches in the coming years.

Cole Bryant, 6-3, G/F, St. Luke’s (CT) – There is upside to his frame with long arms and a lanky build that he is just beginning to grow into. His skill set is impressive with a developed handle and a quality shooting stroke. Combine that with the fact that he’s earned more minutes as the season has gone on and he is a name to know.

Qualeem Charles, 6-5, C/F, Attleboro (MA) – He’s a physically dominant 6-foot-5 big man with a wide body and soft hands. The prototype is that of former Suffield Academy post, Christian Wilkins, who was a division I caliber basketball talent but just won a national football championship at Clemson.

Bryant Ciccio, 5-10, PG, Attleboro (MA) – Right behind his teammate, Ciccio is similarly impactful at a young age as he can run a team, distribute the ball, and has the skill set to score. Long term, he’s going to have to work hard to maintain advantages with his skill, I.Q. and toughness against more naturally explosive guards.

Matt Cross, 6-7, F, St. Mary’s (MA) – Unfortunately Cross’ freshmen season was derailed by an early injury, but he’s already a young player that many people know plenty about. He played up at the high school level as an 8th grader, helped St. Mary’s win an MIAA state championship, and has had similar early success at a variety of NERR events.

Shemar Dennis, 6-3, G, St. Peter Marian (MA) – He’s the latest in a long line of talented young guards to star from day one at St. Peter Marian, as he’s already putting up big numbers. His potential is just as exciting as his current production though as he has the size, physical tools, and playmaking instincts to go a long way. His upside is significant.

Jay Dieterle, 6-3, G/F, Rivers (MA) – Dieterle is a scoring wing who flat out knows how to put the ball in the basket. He can shoot it with range, but has a versatile skill set at a young age, and has also made nice strides to decision making and basketball I.Q. during his first season at Rivers.

Darius Ervin, 5-6, G, Northfield Mount Hermon (MA) – The younger brother of former NMH and All-New England guard Daquon Ervin, Darius has a similar scoring package to his older brother. His size is obviously not ideal but there’s still plenty of time for a growth spurt or to master the nuances of thriving as an undersized lead guard.

Trey Hall, 6-7, F, East Catholic (CT) – He’s been on our radar ever since the 2015 Junior Elite 75, when he showed a unique combination of size and budding skill for a youngster. Those ingredients are still the keys to Hall’s undeniable potential as he continues to learn and begins to turn those tools into mature and efficient production.

Quest Harris, 5-10, G, Worcester Academy (MA) – He’s asserted himself as one of Worcester’s primary offensive weapons since his arrival. Harris is as quick and compact as he is aggressive and fearless off the dribble. He attacks the rim relentlessly and is one of the best guards on this list.

Malachi Hazelton, 6-4, G/F, Bedford (MA) – He has an ideal frame and level of athleticism for a budding wing prospect and has shown nice progression in his game over the course of the last year, both with regard to his perimeter skill set as well as with the evolution of his motor.

Dallion Johnson, 6-2, G, Phillips Andover (MA) – Johnson is a highly skilled guard and one of the best shooters we’ve seen thus far in the class. He has good early size from the perimeter and, as he showed at the Scholar Roundball Classic, is capable of getting hot and scoring in bunches.

Jamari Jones, 6-3, G/F, Brookline (MA) – He’s an athletic wing who was consistently good over the course of the last summer and fall, both on the grassroots circuit as well as at the Elite 75 Frosh/Soph. He hasn’t yet had quite the same impact on the high school level but should make his mark in time.

Frank Kepang, 6-9, C, MacDuffie (MA) – He was a late arrival at MacDuffie this year, but he has some clear tools to develop over the course of the next three-and-a-half years with his size, length, and mobility. He has a bright future if he can learn the fundamentals and the game.

Judson Martindale, 6-5, F, Worcester Academy (MA) – While he missed the beginning of his first season at Worcester with injury, Martindale is another youngster who is already well known on the circuit. A good sized wing and solid athlete who is good in transition and an evolving shooter, he’s versatile and already impactful at a high level of competition.

Kekoa McArdle, 6-8, C/F, St. Joseph’s Central (MA) – He’s started his high school career by being a double-double machine for St. Joseph’s Central, which is very much what we saw at the Elite 75 Frosh/Soph in September. He’s a true big, impactful in the paint, and has a high ceiling down the road.

Dominic Mello, 5-10, G, Wareham (MA) – The lefty point guard has the skill set to handle it, shoot it, and create space. If you’ve never seen him before think of a Damon Stoudamire type style (no we’re not comparing a freshman to a former NBA all-star, just pointing out a style of game that is built in that direction).

Angelo Santiago, 6-3, F, Suffield Academy (CT) – He’s a wrecking ball against other freshmen when he can beat them with his power and aggressiveness, but is going to have to further develop his perimeter skill and overall feel for the game before he can have a similar impact at the prep level playing against guys three years his senior.

Jalin Sinclair, 5-10, G, Suffield Academy (CT) – A New York native who brings that classic NYC type toughness with him to the court, Sinclair is already a double figure scorer for one of Class A’s best teams. Expect him to continue to grow into a leader for the Tiger with his attacking nature, solid shooting stroke, and competitive streak.

Jaylen Smith, 6-2, G, Rectory School (CT) – Smith is one of the top 9th graders in the junior board school levels right now. A scoring guard who aspires to be a big lead guard, he has good size to complement some natural playmaking tools and clear upside as he continues to grow into his body.

Gio Thompson, 6-6, C/F, Chapel Hill Chauncy Hall (MA) – Another junior boarding school product who may very well end up in the class of 2021 before it is all said, Thompson is very young for a current freshmen. He demonstrated some clear potential at the Junior Elite 75 with an athletic frame, good defensive instincts, and a soft touch.

John West, 6-9, C/F, Shrewsbury – West is a true big man and currently two sport star who also thrives on the baseball diamond. He might not even realize how talented he is on the hardwood just yet as he has obvious size but also runs well, has good hands, and a solid motor on both ends of the floor.

Tyler Whitney-Sidney, 5-11, G, Somerville (MA) – He’s been impressive on both the grassroots circuit as well as in the first half of his freshmen season at Somerville. His touch around the rim as a finisher is top notch and his shooting stroke farther along at this stage than others who have had similarly natural playmaking tools.