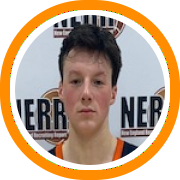 We will be releasing our updated Massachusetts 2023 rankings next. They consist of only players who are returning to the region. Once we have evaluated all the incoming prep prospects, we will have a new release.

The top spot belongs to Worcester Academy and Duke commit TJ Power. He is a forward who has a multifaceted offensive skill-set to go with reliable defensive rebounding ability. Jordan Clayton, a guard from from Bradford Christian Academy and Mass Rivals comes in at number three. The Northwestern commit knows how to run a team but is just as capable of playing off the ball.

St. Sebastian's School and Yale commit Trevor Mullin is at six. He is a guard who can really fill it up as a scorer but has shown nice strides in making plays for others over the past year. At number eight is Tabor Academy and Holy Cross commit Joe Nugent. He proved to be one of New England's top shooters. The southpaw forward has clean mechanics, a quick release, and can make three-pointers off the catch or move.

Another St. Sebastian's School prospect on this list at twelve is Cooper Wright. He is a smooth shooting forward who excels at playing within a team concept. Right after Wright at thirteen is Milton Academy and Holy Cross commit Jack Graham. The wing with versatile scoring ability and good vertical athleticism was a summer stockriser.

Two Middlesex Magic products round out the top twenty with Gavin Carter at nineteen and Todd Brogna at twenty. Carter from Milton Academy is a high IQ/playmaking guard who can also stretch the floor from long-range. Brogna from Worcester Academy is a big man that rebounds at a high volume, scores efficiently around the basket, and has floor spacing upside.

Attached is a link to the full rankings: https://newenglandrecruitingreport.com/rankings/massachusetts-class-of-2023