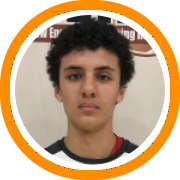 College coaches from some of the most prestigious academic institutions in the country were out in full force on Sunday as Harvard, Brown, Cornell, Dartmouth, William & Mary, Rice, Davidson, Colgate, Boston University, Holy Cross, Williams, Bates, Wesleyan, Hamilton, University of Chicago and numerous others were all in attendance.

A full day of action featured seven games that provided entertainment and multiple prospects from top to bottom.

Here's a rundown of the action:

Coming off Friday night's buzzer beating win over Brimmer & May, Andover completed their perfect 2-0 weekend with another narrow win over a AA opponent. Post-graduate guard Brenton Mills led a balanced offensive attack as he showed a quick first step and slashed his way to 15 points. With KUA locked in on shutting down Dallion Johnson, Khair Greene provided a spark for Andover with 13 while Matteo Whelton added 9, going a perfect 7-7 from the charity stripe. Enoch Cheecks was again impressive for KUA, scoring a game high 29 points, while Jay Elmore and Jammy Pierre-Louis added 16 and 10 respectively in the backcourt.

Returning to the court less than 16 hours after a hard-fought loss to NMH, Perkiomen faced a gritty Choate squad that came into the game with an undefeated record and controlled the pace of play throughout all 36 minutes. Perkiomen junior wing Niels Lane, who is the subject of early high-major attention, led the way with 17 points showing his impressive frame and open floor playmaking ability. Sophomore forwrd Philip Byriel intrigued coaches in attendance with his size and skill, knocking down three threes, while Chris Arcidiacono added 8. Choate post-graduate forward Andrew Kenny scored 17 points and showed a polished skill set of his own along with a versatile attack. Junior sharp-shooter Hayden Peek added 13 points while Aaron Gao and Chuma Azinge were impressive in supportive roles.

Dyondre Dominguez and Mika Adams-Woods scored 15 points each but the Huskies got everyone around early and often with eleven different players getting in the scoring column before the game came to an end. Bas Leyte led the way inside with 14 points while fellow junior big man Camberk Kausuk added 9. Marcus Peterson provided some good minutes on the wing while Tyson Walker didn't need to put up big numers to continue to show what a steal he is for Northeastern. Loomis got 14 points out of Florida Gulf Coast commit Qwanzi Samuels while sophomore point guard Chase Collyer had one of his most impressive performances to date. Eric Moenkhaus added 8 points, but played a very solid all-around floor game for the Pelicans.

Playing in front of his future head coach Tommy Amaker, Harvard commit Chris Ledlum set both a Scholar Roundball Classic and Northfield Mount Hermon School record with 51 points. He was in constant attack mode throughout the game, but picking his spots were deliberately than a night earlier. When it was all said and done, Ledlum had powerful dunks, deep threes, run-away drives, and even some clever passes. Greg Dolan and Cameron Krystkowiak both played well for the second consecutive night as well as Dolan attacked and made tough lay-ups around the rim while Krystkowiak continued to stretch the floor and show his skill set. Despite the loss, Master's was incredibly resilient as they came in missing two senior leaders and competed until the bitter end. Cairo McCrory led the way with an offensive onslaught of his own, finishing with 35 points on a series of athletic drives and high-rising finishes. Jaylen Ricks made a name for himself with 22 points showing a skilled scoring arsenal and pretty instinctive feel for the game to match. Unsigned senior Rakesh Tibby scored 15 points in front of numerous NE-10 coaches on hand.

Making their Scholar Roundball Classic debut, Millbrook opened a comfortable early lead behind some pinpoint outside shooting and then withstood a valiant Cheshire run down the stretch. Gettysburg commit Spencer Curto knocked down four threes and finished with a team high 15 points while unsigned seniors Jayden Reaves and Colby Martins each knocked down three threes of their own to finish with 15 and 14 points respectively. Reaves also showed versatility in his attack to undoubtedly intrigue the coaches in attendance. Unsigned senior big man Justin Allen led the way for Cheshire with 15 points showing his soft hands, touch, and extending range. Junior Asa Beyah and sophomore Ethan Okwuosa finished with 12 and 14 respectively but showed clear scholarship level markers and the potential for bright futures.

A short-handed St. George's team came in missing a couple of key components, including junior guard Tyler Kolek, and AOF took advantage from the early jump. Ciaran Sandy, a post-graduate forward from England, led the way with 17 points showing vast physical tools including a good frame and strong athleticism. Graham Walker, a powerful 6-foot-3 forward from Vermont, provided a spark with his athleticism and aggressiveness including one hard dunk. Junior big man Keegan Sharp had a good showing as well, not only showing the skill he's been known for to this point, but also evolving athleticism in his 6-foot-9 frame. Sophomore guard Kyle Cuffe is definitely a prospect to watch moving forward. He showed an extra gear off the bounce, good lift at the rim, and playmaking instincts on his way to 11 points. Fellow sophomore guard Dominic Mello led the way for St. George's with 15 points as he knocked down a handful of threes and showed his full southpaw scoring package. Junior forward Carter Dummett showed his shooting range and ability to stretch the floor as well.

A young and inexperienced Brimmer & May team continued to show that they were well ahead of schedule as Sunday's win made them 3-2 on the season. Senior big man Jordan Minor has been a big reason why. He's been a double-double machine for the past two weekends, controlling the paint with his athleticism and motor. Sunday night was no different as he again asserted himself inside and also made his free-throws to propel the Gators to their latest win. Freshman guard Jarrell Okorougo slashed his way to 12 points, showing a high upside as he fills out his lanky frame, while sophomore forward Gianni Thompson continued to impress with his consistently improving versatility and motor. Marianapolis got 21 points out of Richmond pledge Tyler Burton, who looks to be in great shape after adding some muscle mass to his frame, while unsigned senior Jared Ullstrom was efficient adding 9 points in a supportive role. Marianapolis has a talented underclassman of their own in Raymond Espinal-Guzman, who showed flashes of his clear potential in the first-half.