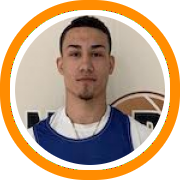 For the better part of the last decade the Scott Hazelton Basketball Camp has been one of our few annual August stops. The camp never always attracts top prospects from Massachusetts, New Hampshire, and especially the Merrimack Valley area and this year was no different.

Akok Akok stood out among the high school campers as expected. The 6-foot-9 stretch-four continued to knock down threes, protect the rim, and play off the bounce with increasing frequency. Most impressive though, might have been his ability and willingness to outrun the college alums from rim to rim as his fluid athleticism was on full display.

Here’s a look at some of the other prospects to stand out this week:

DeMarr Langford – The 6-foot-4 rising junior from Putnam Science has proven his ability to impact winning at the highest level at both the prep and grassroots levels. He’s a sheer winner who still has upside left to discover and continues to enhance his playmaking ability and shooting stroke.

Dallion Johnson – Another 2020 guard coming off a big summer, the Phillips Andover product is one of a scoring guard and one of the best shooters in New England. He’s virtually automatic from behind the three-point line and also owns an advanced pull-up game.

Tyler Whitney-Sidney – The incoming Brooks sophomore has grown leaps and bounds athletically as well as with his game. He plays with good pace and feel, distributes the ball well, and is now finishing above the rim on a consistent basis.

Chris Camille – The Brookline rising senior had a revitalization of sorts this summer, shining at the Elite 75 at then again at the Prime Event in Orlando. He’s most effective going to the rim, using his physical tools to win the battle at the rim, and also has tools to become a versatile defender.

Marty Silvera  – The Worcester point guard will be reclassifying at Putnam Science Academy and joining the class of 2020. Another guard with a natural feel for the game, he has tough, skill, a high I.Q., and the ability to distribute the ball.

Malachi Hazelton  – The Bedford High School rising junior is a high level athlete with a great build. He attacked the rim with vengeance Thursday and showed he has a much improved stroke from midrange as well as from behind the arc.

Kingsley Breen  – A rising sophomore from Dover High School in New Hampshire, Breen is a versatile guard with a physical style. He’s a reliable shooter from behind the arc who can also finish hard at the rim and make an array up pull-ups as well.

Carlos Nunez  – The Lowell High School rising junior has primed himself to be the to take the place of the Raiders shooting guard Alex Rivera. Nunez is an impressive shot maker himself who can knock down the three ball from NBA range while finishing at the rim.

Gio Thompson - The incoming Brimmer and May forward had the best upside of all the 2021 prospects in the gym. Thompson combines good size with budding skilll as he is now knocking down pull-ups with regularity and becoming both more fluid and explosive around the rim.

Nate Godin – The Central Catholic rising sophomore was the most feared shooter in the gym at the Hazelton Camp as he was as close to automatic as one can get.  As he diversifies his game and improves his ability to create off the dribble, he has the potential to be a very difficult cover.

Isaiah Taylor – The Lowell Catholic rising sophomore point guard may only be 5-foot-9, but his speed and athleticism make us for that as he is explosive in the open floor and capable of scoring the ball in a variety of ways.

Xavier McKenzie – A new name to know, McKenzie is an incoming freshman point guard at Central Catholic who could make an immediate impact. He has a good temperament for the position and is able to get into the paint on demand and make plays for himself and others while maintaining his constantly calm disposition.