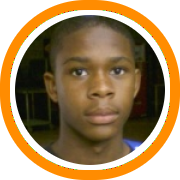 The Hartford Pro-Am is always one of the strongest leagues in New England.  Year in and year out it features a collection of current college and professional players as well as a variety of former stars of the hardwood.

This year’s league has also been impacted, perhaps more than ever before, by a cast of young high school players.  Danny Lawhorn is on the same time with Oriakhi and Trice (Top Dog Entertainment) and has been a blur on the court.  Last week he put up 21 assists in a single game (scoring is at a premium in this league).  Lawhorn has showed an improved jumper too and held his own in a recent match-up against Darius Smith, who is maybe the best defender in the league.

Also suiting up for Top Dog Entertainment has been Jakarri McCallop and Denzel Jones.  Even against a much higher level of competition, McCallop has still been rebounding the ball and scoring inside in very high volume just as he has done over the course of the AAU season.  The rising East Hartford senior has also buried a couple of deep jumpers and looked comfortable doing so.

Josh Turner has been starring with Ryan Gomes, along with other Waterbury products on Hart Nissan’s team.  Turner has looked special at times as he’s been driving the ball well, utilizing some quickness against bigger guys and his length against smaller defenders, while also being on the money with his jumper from anywhere inside of 20 feet.  Turner has also shown his versatility by playing some point over the course of the league.

Also running with Hart Nissan is P.J. Santavenere, who will head to Rise Academy for a post-graduate season in 09-10.  Santavenere is averaging 18 points per game in the pro-am and put up a season high last week with 25.  He's been consistently playing above the rim and making his fair share of jumpers from the perimeter.

Anthony Jernigan is also playing well in the pro-am.  The Jernigan family has deep roots in the pro-am and the youngest member is doing his family proud.  The up and down nature of play is the perfect fit for Jernigan's playmaking abilities and he's responded by putting up good numbers including a number of jaw dropping plays.

For a schedule of upcoming Greater Hartford Pro-Am games visit their website at www.ghpaonline.com.