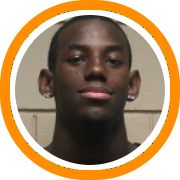 Bridgton Academy guard Darrick Wood recommitted to St. John's on Sunday, writing the final chapter in an on-again off-again marriage to the Johnnies.

Wood, who starred with the Playaz Basketball Club out of New Jersey on last summer's Nike EYBL circuit, made his original commitment to head coach Steve Lavin back in August.  He arrived at Bridgton less than a month later, joining another St. John's pledge in Amir Garrett.

Garrett, who was previously a member of Lavin's 2011 class until he was ruled as a non-qualifier by the NCAA Eligibility Center, fulfilled all requirements after his first semestar and joined St. John's for the second half of the season.  It was shortly after that move that Wood decommitted expressing concern over Lavin's health and expressing an interest to see other programs.

The six-foot-five shooting guard saw wide ranging interest over the next 15 weeks but returned to St. John's campus for a visit this weekend where he reunited with familiar faces like Garrett and ultimately decided to return to the fold.

Wood is the second New England prep star to commit, decommit, and recommit to St. John's in the class of 2012, joing Jakarr Sampson.