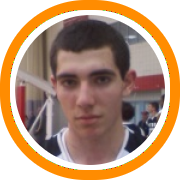 In the U17 Division the Burlington Hawks repeated as Champions beating ProCity (Vergennes) by 30 points in the final game. Burlington got a tough test in the semi-finals from the Connecticut River Valley Vipers, but closed out a 3 point win. Joe OShea showed why he is Vermont’s top ranked player as his three-point shot was deadly all weakened. He also showed an ability to get into the lane and finish in traffic. Austin Robinson also played well for the Hawks connecting from long range and scoring in transition.

In the U16 Division the Vermont Basketball Group came back from a half time deficit to defeat a pesky Bennington Blitz Team 62-51. Ben Ferris swung the momentum with an and-one dunk in transition. Ferris finished with a game-high 23 points. Alex Snyder and Nick Swim each chipped in 13 points. Bennington got 13 points from 6’7 sophomore Clayton Palmer (Mount Anthony HS). For the weekend, the Vermont Basketball Group was led in the scoring column by Josh Varney and Evan Tullar.

In the U15 Division the Sea Cougars took care of business beating the Irish Cats in the finals. The Sea Cougars, who won last year’s U14 title, were virtually unchallenged during the weekend. Eric Suder was strong in the post all weekend and Tom Lacy showed an ability to score in a variety of ways. Rising ninth-grader Casey Tippson did an excellent job running the point and taking the ball to the basket.

Harrison Taggart- The freshman swing man had multiple 20 point games, despite playing up a year, making three point shots, hitting pull ups and getting to the rim. The Mill River HS product is a legit 6’3 and can play the point and wing position

Andrew Shuman – The freshman center brought the house down with a drop step dunk and showed his athleticism all weekend long.

Adam Boyle – The junior showed off his scoring versatility with strong post moves and a nice stroke from the outside. His muscular frame allows him to defend the post and the perimeter.

Jake Donnelly – Did a nice job all weekend being the floor general for the Vermont Basketball Group, and showed off his range draining three deep threes against Bennington.

Jaren Scrubb – The Stowe HS sophomore showed why he is considered one of the best ball hawks in the state forcing numerous turnovers all weekend to key the fast break.