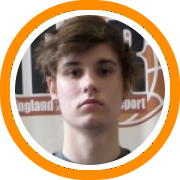 The second of our glimpses inside each of the six state associations focusing on Massachusetts’ MIAA where there is one team expected to dominate, a number of upperclassmen trending up, and some seriously talented underclassmen already making their presence felt.

Jakigh Dottin & Dimon Carrigan, Cambridge – The defending Division I champs return the brunt of their line-up including this dynamic duo. Dottin is a charismatic and powerful playmaker with the ball in his hands while Carrigan is a late blooming big man and an elite rim protector on the defensive end. Add Daniel Rymer, a powerful player in the paint, and Jonathan Cenescar, an equally powerful slashing forward, and they look poised to have a good chance of repeating in Division I.

Ethan Wright, Newton North – Although still just a junior, and a young one at that, Wright experienced a breakout sophomore season last year and returns as one of the most known talents in all of the MIAA. The highly skilled guard can shoot it with range but is equally capable of attacking the rim and rising up for explosive finishes.

Taelon Martin, Putnam Tech – The sophomore class in the MIAA is particularly strong and Martin is just the first example. He’s still young and developing but there’s no denying his potential and progression. He has good size, broad shoulders, long arms, athleticism and a playmaking instinct that gets better by the month.

Tommy ONeil  & Nate Hobbs, St. John’s Prep – The duo makes for a more than formidable one-two punch in the class of 2018. O’Neil is a southpaw forward who can both score it as well as rebound it in high volume while Hobbs is an athletic guard showing unprecedented assertiveness thus far. Add in fellow juniors Matt Relihan and Colin Lomasney, and freshman point guard Jarnel Snow Guzman, and SJP is both good now, despite a recent bump in the road, and will be even better down the road.

Carl Pierre, Boston College HS – A long and athletic guard with some definite upside, Pierre showed some very intriguing upside this summer on the grassroots circuit. As he returns to BCHS for his senior season he has a chance to turn that potential into production on a consistent basis and will have plenty of help with junior guard Travis Evee leading the supporting cast.

Thomas Shaughnessy, Needham – The junior point guard comes into the high school season riding a wave of confidence following a breakout summer on the grassroots circuit. As hard-nosed and tough as you’ll find, Shaughnessy showed he can not only make big plays but also has a wealth of winning intangibles at his disposal.

Ulyen Coleman, Catholic Memorial – A southpaw scorer who can get buckets in all three ranges, Coleman has already committed to division II Southern Connecticut. Before heading off to the NE-10 then he’ll try to lead CM to another sectional title, although he’ll need help from an inexperienced supporting cast to do so.

Chris Camille, Brookline – One of the most talented sophomores in the MIAA, Camille is oozing talent, but he’s still early in the process of turning potential into production every time he takes the court. He’s making strides early, including a recent 25 point performance in a win against Burke, and he has plenty of help in the process with junior Mark Barrett and several other talented underclassmen on board.

Nick Timberlake, Braintree – He looked to be on the verge of breaking out this summer and if early reviews this winter are any indication, that’s exactly what may be happening now. He has good size on the perimeter, is very skilled, has gotten a lot stronger and is even showing off some sneaky athleticism early in the season.

Dajour Dunkley, Burke – The ultra-quick playmaker is off to a predictably strong start for Burke, leading them to a 4-1 start out of the gate. Dunkley isn’t just making plays off the dribble, but he’s also creating for those around him and making plays on the defensive end as well. Put it all together and he’s making a big impact on both ends of the floor.

Rivaldo Soares, O’Bryant – The sophomore swingman made a big impression at the Elite 75 Frosh/Soph in September and is someone we’ll watch closely this season. He may be still an underclassmen but he’ll have an opportunity to play a marquee role for a team that should be poised to make some noise in the D2 south.

E.J. Perry, Andover – He may be headed to Boston College to star on the gridiron, but he’s making the most of the time he has left on the hardwood by putting up huge numbers to start the season. Simply put, he’s a winner and as competitive as they come.