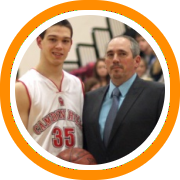 It's become a little redundant as every week we start with almost the same phrase but once again New England's week was cut short by the latest snow storm.  Nevertheless, there were a variety of top performances:

Player of the Week – John Papale, Choate Rosemary Hall – Papale set three different school records last weekend when he made nine second half three-pointers.  The junior scored 28 of his game high 32 points in the second half as Choate came back from a one point halftime deficit to beat Loomis Chaffee 76-55.

Player of the Week – Sean McClung, Bishop Guertin – The senior swingman opened the week with 17 points in a win over Exeter and then eclipsed a major milestone when he scored 24 points in a big win over Manchester Memorial including the 1000th of his career.

Player of the Week – Mount Anthony and Rice Team Defenses - In respective Division I match-ups involving significant playoff seeding implications, each program rose to the challenge with lock-down defensive efforts to secure critical league victories.  In a Marble Valley League showdown, the Patriots held high-powered Rutland to a season-low 47 points en route to a 53-47 home win, while the Green Knights held Metro-rival Mt. Mansfield to just 11 field goals and a season-low 34 points to avenge an earlier season loss to the Cougars.

Player of the Week – Robert Lewis, Central – One of the state’s leading scorers made a huge statement when he exploded for 36 points to lead his Central team over Bishop Hendricken.  Lewis’ scoring barrage including five three-pointers and a variety of drives to the basket.